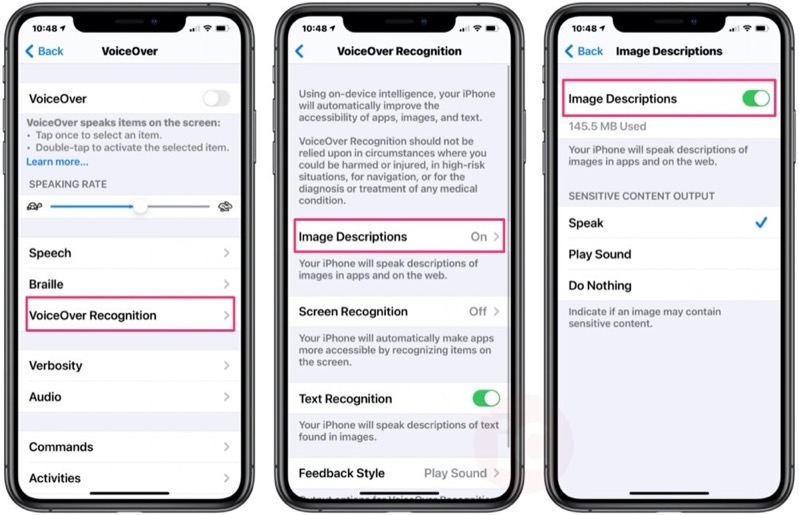 Within iOS 14 there’s a new VoiceOver Recognition feature for images and it’s pretty impressive in describing what’s in a picture for visually impaired users.

The feature is worth trying out as it demonstrates Apple’s advancements in machine learning when it comes to examining the details in a photo. The handling of descriptions is on your device as you need to download an Image Descriptions file to your iPhone or iPad.

“Using on-device intelligence, your iPhone will automatically improve the accessibility of apps, images, and text,” describes Apple’s VoiceOver Recognition setting. For Image Descriptions, “your iPhone will speak descriptions of images in apps and on the web.”

Here’s how to enable Image Descriptions in VoiceOver to give it a try—the easy way (via Reddit):

Image Descriptions in iOS 14 will detail if it’s a Live Photo, the date the picture was taken and then the image itself. If there are saved faces, it will even mention the person’s name. Very impressive.

Some of the incredible descriptions we were able to hear from Siri include, “A child holding a slice of pizza and posing for a photo, in front of a pizza on a table. Maybe ____.” Very descriptive indeed.

One blind VoiceOver user on Reddit explained, “This is one of the most detailed description algorithms to date. I’ve been using this since.the first betas and love it. It doesn’t describe only photos in the Photos app, but also images on the web and in any other app, aka Instagram or Twitter. And best of all, after the initial database download, its all offline processing.”

Let us know if you give this feature a try as it’s pretty cool. Now if only Siri was this smart, am I right??!!