Apple has updated its Developer App Store Distribution page to note iOS 8 adoption has reached 47% of devices, as measured by the App Store as of October 5, 2014, now tied with iOS 7 at 47%. 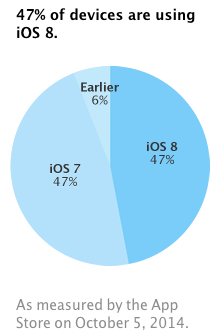 The previous rate of adoption was 46%, which was on September 21, 2014, just six days after the new mobile operating system’s public release. This means there was only a 1% increase in two weeks, which hints adoption may have slowed.

The slower growth can most likely be attributed to the recent iOS 8.0.1 SNAFU, a buggy release which caused users to lose cellular connectivity and disabled Touch ID fingerprint sensors. You can probably imagine how quickly people told friends and family not to update (I know we did).

iOS 8.0.2 was released shortly afterwards and it will be interesting to see how much these adoption numbers will change in the coming weeks.