iOS 8 was released only six days ago, but it has already reached an install base of 46% of devices visiting the App Store, the latest numbers shared on the Apple App Store developer support page reveal (via iClarified). 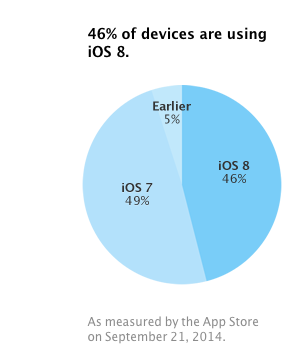 As you can see from the above image, roughly half (49%), of the devices connecting to the App Store, are running iOS 7 while only a fraction of the active iDevices are running earlier versions.

Before the Apple event, Chitika reported that 90% of the devices are running iOS 7 (in North America), while only 6.4% were using iOS 6, 2.7% iOS 5 and 1% using an earlier version of the operating system.

The iOS 8 adoption rate is impressive, although it may look slower compared to that of last year, when it jumped to 34% in just 24 hours. It is worth mentioning that iOS 7 brought the biggest design change since the launch of the iPhone in iOS history.

The hotly anticipated iPhone 6 and 6 Plus arrived in stores last Friday. Since then some iPhone 6 Plus users have blamed iOS 8 for causing a variety of problems such as battery drain, slow Wi-Fi etc.