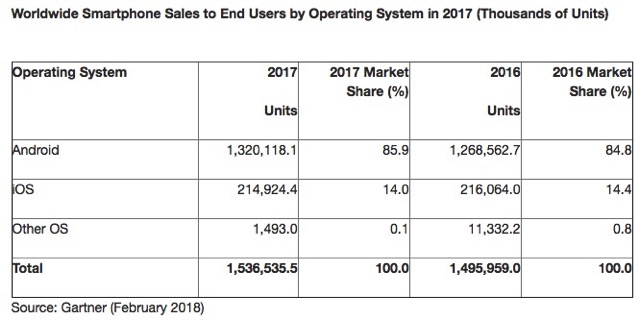 According to the latest data from research firm Gartner, iOS and Android, two of the world’s most popular mobile operating systems, captured a record 99.9% market share in 2017 (via MacRumors). Squeezing out all competing platforms last year, Android and iOS grabbed roughly 86% and 14% of global smartphone market share respectively.

Android’s dominance is unsurprising given the software is installed on dozens of different smartphone models offered at a range of price points, whereas the iPhone primarily caters to the high-end market.

iOS and Android have been the leading mobile operating systems for many years now, but the duopoly became so dominant last year that Gartner doesn’t even break out BlackBerry and Windows Phone individually anymore. Together, the platforms accounted for less than 0.1 percent market share in 2017.

Gartner’s data estimates that over 1.5 billion smartphones were sold worldwide last year, out of which handsets running BlackBerry OS, Windows Mobile, and all other platforms accounted for only 1.5 million units.

In terms of worldwide smartphone sales, Gartner notes that a 5.6% decline was recorded in the last quarter of 2017, marking the first year-on-year decline since it started tracking the global smartphone market in 2004. Samsung saw a year-on-year unit decline of 3.6%, although this did not prevent it from defending its No. 1 global smartphone vendor position.

Among the top 5 smartphone manufacturers, Huawei and Xiaomi were the only vendors to experience growth in Q4 of 2017.