iOS Concept: Non-Obtrusive Alerts When Do Not Disturb is Enabled [VIDEO] 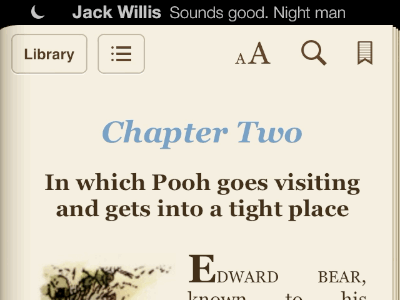 A couple days ago we saw a clever concept to toggle Do Not Disturb within Notification Center, created by designer ‘Sentry’. He has now created a follow up concept to showcase how he would like to see push notifications when Do Not Disturb is enabled. The idea is to eliminate pop up alerts that would appear on the screen but rather have them show within the iPhone’s status bar, as Sentry explains:

When a user enables Do Not Disturb, their natural assumption is that they will no longer be disturbed. However, banner alerts still pop up with their normal intrusive fashion, vibrations and all. Considering the crescent is visible in the status bar whether the phone is locked or not, how is the user to naturally know that DND applies to the lock screen only?

And more importantly, what is the user to do if they don’t want to be disturbed while the device is actually in use, and not just locked?

This concept addresses that with non obtrusive alerts for when Do Not Disturbed is enabled.

Check out how the concept idea would work below in the following video:

Notifications with iOS certainly can be a distraction when you’re trying to relax and just unplug from the internet for a while. For this reason alone, it is much easier to read books on my Kindle Paperwhite rather than my iPad. Plus, a front lit e-ink screen is much easier on the eyes after a day of staring at LCDs.

Google on Tuesday announced new product updates, and its latest includes the debut of the Nest Wifi Pro with Wi-Fi 6E support, the first router from the company that is triband mesh network ready. Wi-Fi 6E (E for Extended) leverages the new less-crowded 6 GHz radio band and offers speeds up to two-times faster than […]
Gary Ng
15 mins ago

Google today announced a major update for the Google Home app that brings a fresh new design, Matter integration, support for both Wear OS and the web, and plenty of new features. The company said it set out to reimagine Google Home because the number of average connected devices per user has gone up from...
Nehal Malik
37 mins ago