Marking the first positive quarterly growth in four years, quarterly first-time downloads of iPad apps surpassed 1.1 billion worldwide in Q1 2020, Sensor Tower is reporting. Driven by a surge in use during the COVID-19 pandemic, consumer spending across iPad apps crossed the $2 billion threshold for the first quarter ever. 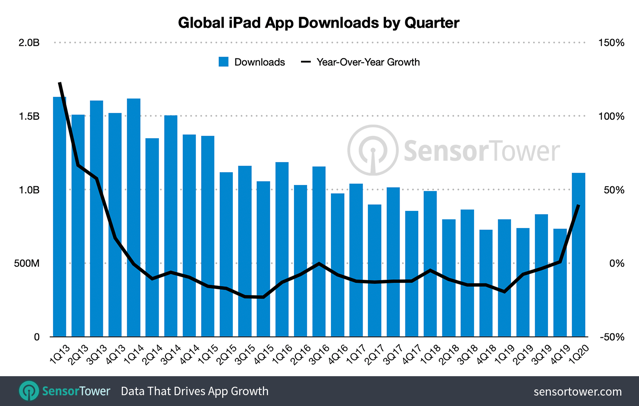 With global iPad app downloads seeing a 40% increase as compared to Q1 2019, monthly installs of iPad apps also reached their highest level since February 2015 last month, when they climbed to nearly 438 million, a Y/Y increase of almost 72% and month-over-month growth of about 21%.

Games were the largest source of new iPad downloads in Q1 with close to 603 million installs globally. Overall, China was responsible for the largest number of March’s new iPad app installs at 151 million, followed by the United States at 100 million.

While iPad app installs reached levels not seeing in several years due to the COVID-19 pandemic, consumer spending in apps on Apple’s tablet platform last quarter crossed a major milestone. Consumers spent an estimated $2.1 billion in iPad apps globally during Q1 2020, six years after quarterly spending crossed the $1 billion mark in Q1 2014. About 76 percent of this, or approximately $1.6 billion, came from games.

In terms of spending, U.S. consumers contributed the majority of last quarter’s record total with approximately $893 million in iPad apps.