According to the latest data shared by research firm International Data Corporation (IDC), Apple sold more iPad units in 2017 than both Amazon and Samsung tablet shipments combined, capturing a 26.8% share of the tablet market during the year. To put things into perspective, roughly one in every four tablets sold last year was an iPad. 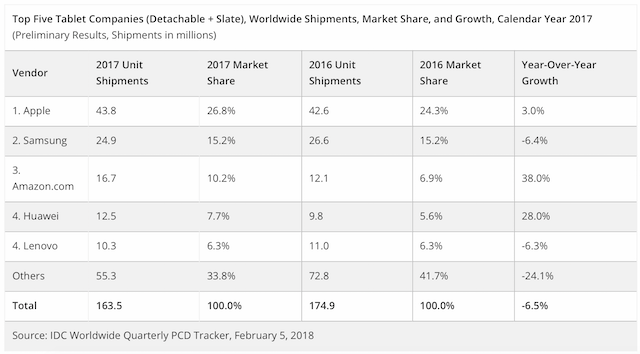 The tech giant shipped a total of 43.8 million iPad units in 2017, while Samsung and Amazon shipped 24.9 million and 16.7 million tablets respectively.

“Apple maintained a solid lead in the holiday quarter driving growth both through its lower-priced 9.7-inch iPad as well as its newly refreshed iPad Pro products. While the lower-price iPad has continued to drive a strong consumer upgrade cycle, the shifting focus is to iPad Pro and its potential in the commercial and education segments. With the only expected tablet growth to come from these segments, Apple’s recent launch of “Apple at Work” shows their commitment to maintain its leader position.”

Amazon was able to steal the second position from rival Samsung by offering steep discounts during the holiday season. For Samsung, while shipments of its detachable-tablets continue to rise, these gains were outweighed by the declines seen among its slate models. Huawei and Lenovo took the 4th and 5th spots, shipping 3.5 million and 3.1 million tablets respectively.

Apple reported a revenue of $5.8 billion from iPad sales last week, representing growth of 6% compared to the year-ago quarter.

Google today officially announced its wired, second-generation Nest Doorbell. The company was originally expected to unveil a slew of new Nest devices at its Pixel launch event on Thursday, October 6. However, the wired Nest Doorbell leaked on Monday and reports indicated it would go on sale before Thursday's event. https://youtu.be/N_xfwAm79iY Google's new Nest Doorbell...
Nehal Malik
1 min ago