Apple has somehow found its way into the hearts of Chinese customers with the iPhone 6 and 6 Plus: Between November 2014 and January 2015, iOS reached its highest ever share in urban China, with one in every four smartphones sold being an iPhone, reports Kantar Worldpanel ComTech.

“In urban China, Apple iPhone 6 was the best selling phone in the three months ending in January with a share of 9.5%”, explained Tamsin Timpson, strategic insight director at Kantar Worldpanel ComTech Asia. “Xiaomi had several smartphones in the top 10 chart with the RedMi Note its best selling device and the second most popular product behind the iPhone 6 which has a share of 8.9%”. Over the past three months, Apple continued to close the gap with Xiaomi, which remained the leading brand in urban China but with only a 2.2 percentage point advantage.

In Europe, Android continued its downward trajectory, dropping 2.2% year-over-year to 67.2%, while iOS continued to rise (3.2%), with the British market recording the biggest drop in Android market share.

Now that the holiday sales period is over, iOS has dropped to second place. What’s noteworthy, though, is that the iPhone 6 has maintained pole position as the most sought-after smartphone. In the latest period, 13.9% of iOS customers switched over from an Android device, up from 12.1% reported in the holiday quarter. 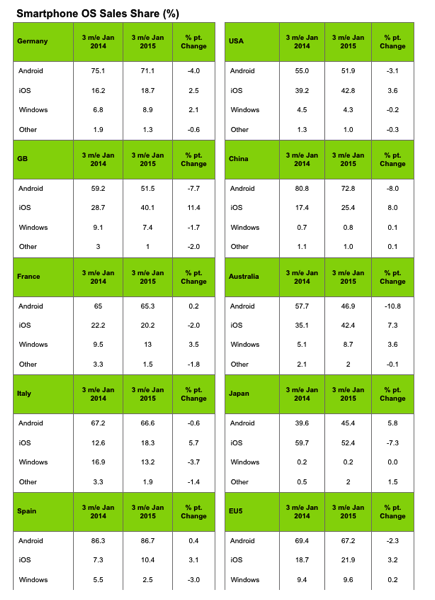