The iPhone 6 launch has pushed iOS market share up by 5.7 percentage points to 20.7% across Europe (the big-five European market includes the UK, Germany, France, Italy, and Spain). In the United Kingdom, Apple’s iOS accounts for 39.5% of sales, the latest data for the three months ending October 2014 from Kantar Worldpanel Comtech shows.

Apple’s market share in the US is up 0.7% for October 2014 compared to the same month a year ago. The iPhone 6 outsold the iPhone 6 Plus by a 3:1 ratio, says the market research firm.

Dominic Sunnebo, strategic insight director at Kantar Worldpanel ComTech, comments: “Apple has experienced a huge jump in sales share across almost all major markets thanks to the launch of the iPhone 6. In major European economies, the US and Australia, Apple’s share of sales has risen. This success is particularly evident in Great Britain where Apple now has its highest ever share of sales with 39.5%. Most of these sales were driven by loyal Apple users. Some 86% of British buyers upgraded from an older iPhone model, only 5% switched across from Samsung.”

The two biggest carriers, Verizon and AT&T, took almost equal shares of iPhone 6 Plus sales. Overall, Apple’s handsets took four of the top five places for the most sought-after handset over the past three months. 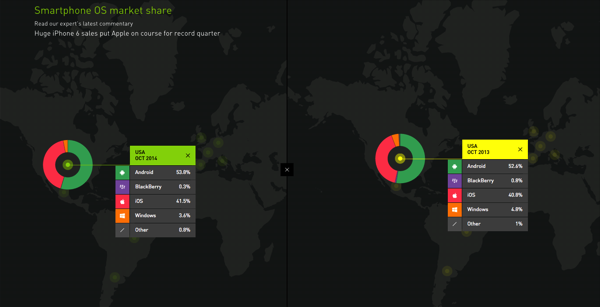 In China, Apple’s iPhone 6 was the third-best-selling smartphone in October, pushing the company’s market share up 0.2 percentage points to 15.7%, according to Kantar.