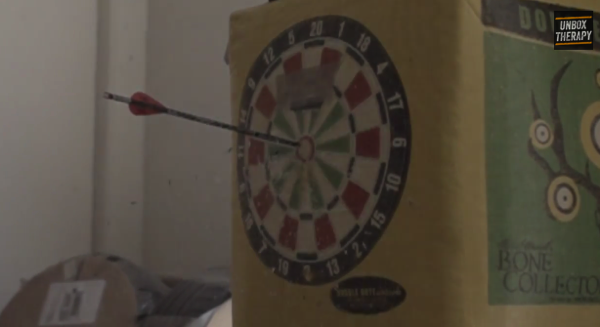 Canadian YouTube channel Unbox Therapy has performed its own iPhone 6 sapphire glass torture test, featuring celebrity Joe Rogan, who pulls out a high powered compound bow to see what will happen. One of those iPhone 6 dummy units also gets tortured by an arrow as well—check it out below:

Earlier this month YouTuber Marques Brownlee shared a video of the alleged iPhone 6 sapphire display holding up well against various scratch and bend tests. He has posted another video explaining more about the sapphire glass being scratched by sandpaper, which also concludes with a scene leading into the video you watched above (these popular tech YouTubers did a collaboration):

The test shows the new sapphire screen does hold up much better than Gorilla Glass on the iPhone 5s and probably will not require a screen protector as your keys won’t do much damage to the glass.

Another video is also coming from Jonathan Morrison (@tldtoday) and Austin Evans (they had to re-upload their vids):

Yesterday, local media in Taiwan reported Foxconn would begin production of the 4.7-inch iPhone 6 this month, while the larger 5.5-inch model would start in August, with the new models expected to debut sometime this fall.