Officials Bust iPhone 6 Smugglers On a Speedboat in China 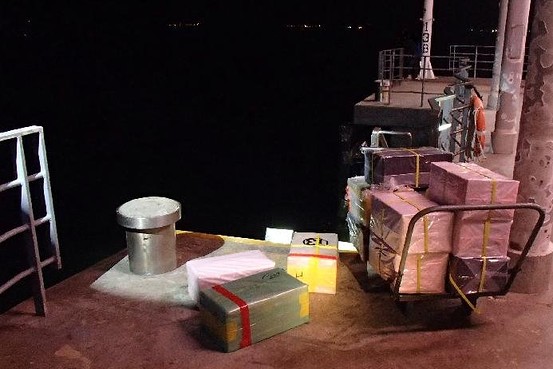 A short documentary of Apple’s iPhone 6 launch in New York City was released over the weekend by film producer Casey Neistat, showing lineups full of resellers and scalpers allegedly run by the ‘Chinese Mafia’. Today, Hong Kong authorities have said that they foiled an apparent attempt to smuggle at least 138 new iPhone 6 and 6 Plus units on a speedboat in a rural coastal area opposite the Chinese shore, The Wall Street Journal reports.

Customs officials said several men fled on the boat when approached by law-enforcement officers, leaving behind 15 boxes that also included 1,890 hard drives and 16,235 computer-memory chips. A spokesman for the customs department said Monday that the investigation was ongoing.

On the gray market for scalped iPhones, the price premium for the most expensive model, the 128-gigabyte version of the iPhone 6 Plus, jumped to more than $1,000 on Friday, according to phone retailers in Mongkok, a bustling neighborhood that is well known to anyone shopping for unlocked iPhones and other gray-market electronics.

The publication notes that Jay Lam, a Hong Kong shop manager, left Apple’s store in Causeway Bay on Friday with a big smile on his face as he picked up two gold iPhone 6 Pluses. Mr. Lam told WSJ the he planned to sell the two phones for HK$20,000 each ($2,600), making a handsome profit from the official retail price of HK$8,088. Gray market vendors with big suitcases, who could be seen counting money outside the store, were more interested in collecting the iPhone 6 Plus, especially the gold model, which they said had strong demand from China.

In Asian-Pacific region, the new iPhones are on sale only in Hong Kong, Singapore, Japan and Australia, as Apple still awaits regulatory approval for iPhone 6 launch in China, one of its largest smartphone markets.