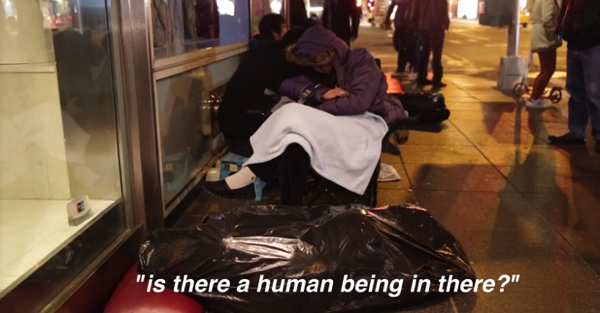 New York City-based film producer Casey Neistat has released a short documentary of Apple’s iPhone 6 launch in New York City, where line ups were dominated by an explosion of resellers and scalpers, which he alleges is run by the ‘Chinese Mafia’.

The Fifth Avenue Apple Store had a line up of 1,880 people that spanned 12 city blocks, according to Business Insider’s video:

The video shows people camped out in line, buying phones in cash, then getting paid afterwards for their work. New York City cops are seen policing lines, telling people they can’t sleep on the sidewalk. One NYPD officer can be heard saying “you people ever heard of soap? You f**king stink.”

There’s no surprise this always happens when iPhone launches that don’t include mainland China at launch., as Apple still awaits licensing there to launch the iPhone 6. Gold iPhone 6 models were said to fetch as much as $3,600 in China via the black market,

The scenes from the video are eerily similar to what we told you about in Vancouver (line sitters were paid up to $200 each), where the RCMP had to be called to control the line up at Metrotown in Burnaby as line sitters started budging and overwhelmed security. Other stores across Canada and even down in Australia were dominated by paid line sitters working for scalpers.

Resellers are notorious for adding ‘friends’ to the lines and budging. It usually works something like this: a massive group congregates near the front of the lines, all working together. As the night goes on, more and more companions casually ‘join’ in. Since most are working together, nothing is said and those at the back of the line can’t do anything to stop them (trying to fight against a ‘language barrier’ and mob mentality is near impossible).

How can Apple stop resellers from buying up stock to send overseas? It’s not that easy. They could only sell unlocked iPhones online, or limit stores sales to credit card only and by identification.

How was your line-waiting experience? Did you see suspected line sitters at your local Apple Store? Do you see this as a problem?