Apple’s Lightning to 3.5mm Adapter Gets Tear Down Treatment [VIDEO]

If you were interested in what’s hiding inside the plastic case of the Lightning EarPods’ connector, you are not alone. Vietnamese website Tinhte has performed a teardown of the accessory, alongside the Lightning-to-3.5 mm headphone jack adapter, confirming that they include a small digital-to-analog converter (DAC). 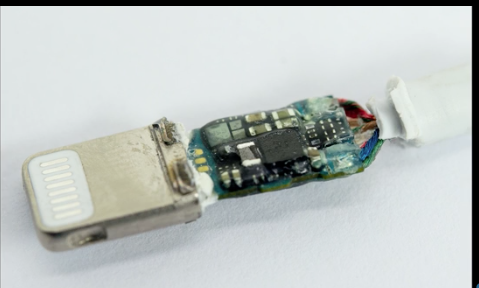 There is a tiny little chip responsible for this job, and its labeled 338S00140/A0MU1621/TW. The EarPods carry a similar chip labeled 338S00140/A0QK1623/TW. Although it doesn’t carry a branding from a specific manufacturer, it’s an open “secret” that Apple’s source for audio-related chips is Cirrus Logic. This company also happens to supply digital-to-analog converters, so this could solve the mystery around the chip’s manufacturer, as pointed out by MacRumors.

Apple says it had the “courage” to remove the 3.5 mm headphone jack and include an all-in-one Lightning connector port with the iPhone 7 and 7 Plus, hence forcing iPhone users to either use the supplied Lightning-to-3.5 mm headphone jack adapter to use their already purchase headphones or go wireless with the new EarPods. Of course, customers can always use the EarPods Apple provides with the iPhone 7 or 7 Plus.