‘iPhone 8’ May Have Touch ID Built in its Display, Suggests Patent 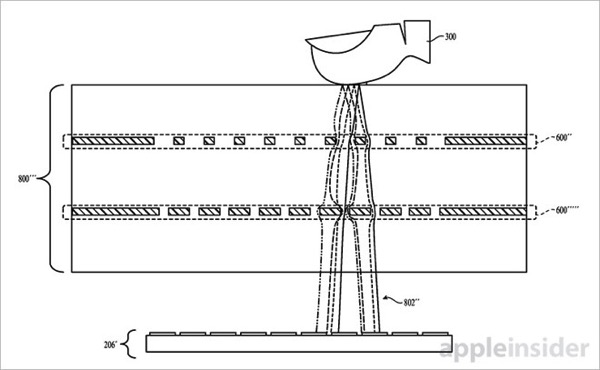 Apple is believed to be working on a “virtual home button” which presumably carries over the same features and functions as the physical Touch ID module seen in current generation iPhone and iPad devices. Today’s patent details new capacitive sensing technology that works through gaps in space, thereby allowing a future Touch ID module to sit behind iPhone’s display.

Apple proposes the use of electrostatic lenses to reduce the gap between the contact surface where a user places their finger and the capacitive sensing array.

As explained by Apple, electric fields associated with particular points on a finger can be illustrated as a cones. From a contact surface, these cones spread out from their respective apices and commingle with each other, causing the blur mentioned above. Continuing forward with the example, electrostatic lenses are tuned to receive an unshaped cone and produce shaped versions that are subsequently spread across an array of sensing elements to achieve an accurate image of a user’s fingerprint

The document goes on to detail a host of possible system configurations, from single-pattern solutions to installations with multiple sensors. Most importantly, the patent covers a scenarios in which an electrostatic lens is used to refine blurring caused by interrupting internal components like displays.

Apple’s electrostatic lens patent, which was first filed for in September 2014, is however just one piece of a larger puzzle, as hiding a fingerprint sensor behind a handset screen would require numerous enhancements over existing technology.

Taiwan Semiconductor Manufacturing Co. (TSMC), Apple’s primary chip supplier, will also produce advanced 4-nanometer chips at its $12 billion USD under-construction manufacturing facility in the U.S. state of Arizona — reports Bloomberg. The information comes from people with knowledge of the matter, who said TSMC will announce the new plan next week during a ceremony at...
Nehal Malik
50 mins ago