An iPhone app called the DermoScreen, which is developed by George Zouridakis, professor of engineering technology at University of Houston, has been found to detect melanoma, the most dangerous form of skin cancer, at an accuracy rate of 85%, 9to5Mac reports. The results, which are as good as those achieved by specialist dermatologists, are found to be more accurate than examination by general physicians. 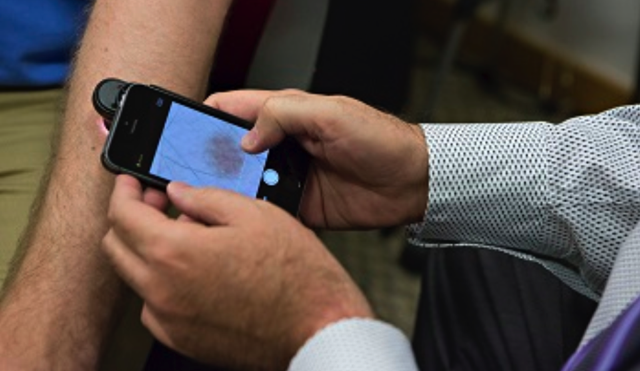 For those who aren’t aware, melanoma is a type of skin cancer caused by too much exposure to the sun and is responsible for around three-quarters of all skin cancer deaths, since its spreads very quickly if not detected at an early stage. The report notes that a $500 dermoscope, a magnifying lens and light are attached to the back of the iPhone, and the iPhone camera is used to take a photo of a suspicious mole or lesion. Within a few seconds, the app analyzes the image to determine whether or not it is likely to be malignant.

“DermoScreen could be commercialized soon; investors began expressing interest more than a year ago after a student team from the University’s Wolff Center for Entrepreneurship produced a business plan that won the $60,000 Grand Prize at the 2013 California Dreamin’ National Business Plan Competition and successfully pitched it in competitions around the country.

But Zouridakis, who has additional UH faculty appointments in electrical and computer engineering and in computer science, wanted to wait, both to pursue other diagnostic uses for the technology and to ensure that it was as accurate as possible.”

The app is currently being evaluated for further testing at the University of Texas MD Anderson Cancer Center.