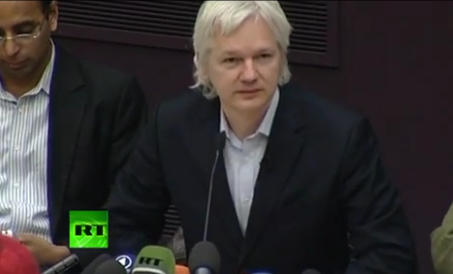 According to Wikileaks founder, Julian Assange, there is a large surveillance industry that has increasingly gotten larger since the attacks of 9/11. Speaking at the Bureau of Investigative Journalism at the City University of London, Assange said the following:

…This in-depth investigation shows that this is not the relatively small industry it was 10 years ago. 9/11 has provided a license for European countries, for the U.S., for Canada, South Africa and others to develop spying systems that affect us all”

During his talks he mentions surveillance technology has been sold to dictators and democracies to intercept details about the lives of citizens and more. More than 287 files have been released as part of the new Spyfiles Project, that details companies and countries involved. An excerpt from their website about how surveillance helped dictators:

When citizens overthrew the dictatorships in Egypt and Libya this year, they uncovered listening rooms where devices from Gamma corporation of the UK, Amesys of France, VASTech of South Africa and ZTE Corp of China monitored their every move online and on the phone.

Surveillance companies like SS8 in the U.S., Hacking Team in Italy and Vupen in France manufacture viruses (Trojans) that hijack individual computers and phones (including iPhones, Blackberries and Androids), take over the device, record its every use, movement, and even the sights and sounds of the room it is in. Other companies like Phoenexia in the Czech Republic collaborate with the military to create speech analysis tools. They identify individuals by gender, age and stress levels and track them based on ‘voiceprints’. Blue Coat in the U.S. and Ipoque in Germany sell tools to governments in countries like China and Iran to prevent dissidents from organizing online.

Trovicor, previously a subsidiary of Nokia Siemens Networks, supplied the Bahraini government with interception technologies that tracked human rights activist Abdul Ghani Al Khanjar. He was shown details of personal mobile phone conversations from before he was interrogated and beaten in the winter of 2010-2011.

They also go on to mention some details about RIM and how it works with countries to share client data:

Telecommunication companies are forthcoming when it comes to disclosing client information to the authorities – no matter the country. Headlines during August’s unrest in the UK exposed how Research in Motion (RIM), makers of the Blackberry, offered to help the government identify their clients. RIM has been in similar negotiations to share BlackBerry Messenger data with the governments of India, Lebanon, Saudi Arabia, and the United Arab Emirates.

Earlier today it was reported Syria has banned the iPhone to prevent protest footage from being uploaded to YouTube and other information from leaving the country. Couple this information with what we’ve learned about Carrier IQ and iOS, and it becomes all too relevant how much trust we can put into companies that hold our information.

So, what do you think? I use Gmail and an iPhone…so that means I’m ‘screwed’–are you?