There are always some interesting bugs out there in the iOS universe, and the latest one according to Reddit is one that will brick your iPhone 5s (64-bit devices) or newer if you set the date back to January 1, 1970.

The bug was first discovered on the Chinese forums Feng, when one user wrote about how the date bug earlier this week wrecked their iPad Pro. 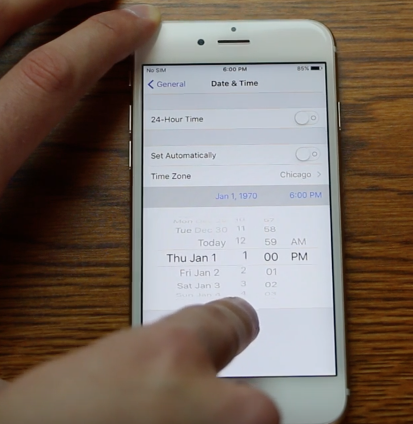 A couple videos have shown how iPhones get stuck in an endless white Apple logo loop when trying this out. Even DFU mode won’t fix it. Check them out below:

As for why this happens? Developer @LFCameron7 attempts to explain the issue:

This is to do with something called ‘Unix Time‘, Unix Time is simply a way to track time, counting only in seconds. Unix Time counts the number of seconds that have elapsed since 1st Jan 1970 and is used universally across the world of technology. So therefore changing the date to 1st Jan 1970 would set this Unix Time to a value of ‘0’. Now, the bricking could be caused by the fact that iOS is dividing by this value to calculate the time and date and we all know that diving by 0 = RIP, it will cause a fault in the kernel which will make the device unable to boot. On the other hand, this could be due to using an unsigned int to represent the value, an unsigned int can only be using to hold values of positive numbers, so a value of ‘0’ could be causing the error.

For jailbroken users, a new tweak called BrickingDate created by Ziph0n will prevent your evil friends from bricking your iOS device.

As for a fix to this January 1, 1970 date bug? Users are saying to disconnect an affected iOS device’s battery, as this will reset the onboard Parameter Random Access Memory (PRAM) and System Management Controller (SMC), which contains date and time info, allowing devices to reboot properly again.

Do not try this at home folks!