Apple customers are still the most satisfied among all smartphone users, but the company is losing ground in terms of consumer satisfaction, according to a new report issued by the American Consumer Satisfaction Index. 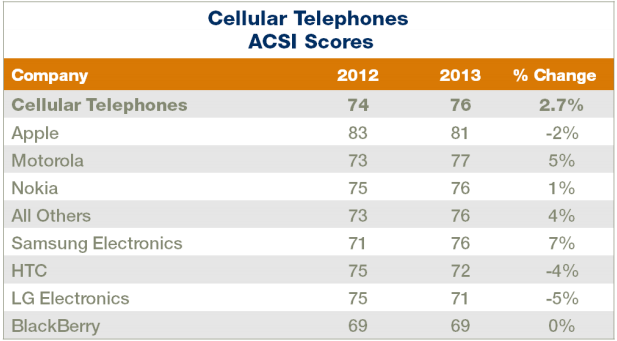 While the iPhone’s popularity slightly dropped among consumers, Samsung recorded the biggest gain among all handset manufacturers, posting a 7% growth since last year’s position. Motorola is poised to grow as well, as it received 77 points in terms of customer satisfaction, second only to Apple.

“The improvement [for Samsung] is the largest yet for any cellphone manufacturer,” the ACSI report said. “Nevertheless, Samsung remains well behind industry leader Apple.”

The ASCI consumer satisfaction index is based on a survey of 70,000 people in the US. It measures customer satisfaction with more than 230 companies in 43 industries and ten economic sectors.