Apple will allegedly report a record fourth fiscal quarter, according to analysts surveyed by Fortune’s Philip Elmer-DeWitt. Expectations are high: The average forecast of the 33 Apple analysts is that earnings will be up 12% year-over-year, and revenue up 7% to $40 billion.

Actually, today is a busy day for Apple: Besides reporting sales for the quarter ending September 30, the company will launch its foray into the mobile payments market, Apple Pay. The payment tool will arrive alongside a software update, iOS 8.1. Also today, Apple will switch on iCloud Photo Library and the highly anticipated Handoff feature in Yosemite.

While there was previously a gap between amateur and professional analysts, this seems to be narrowing today: both expect iPhone sales to exceed 37 million for the past quarter. More precisely, the average independent (amateur) analysts expect Apple to report 37.47 million iPhone, 13.35 million iPad and 4.80 million Mac sales.

CEO Tim Cook and CFO Luca Maestri will share more information about the past quarter’s earnings and give more details of what has happened during the past three months, as well as the company’s projection for the holiday quarter, at 5 p.m., ET. 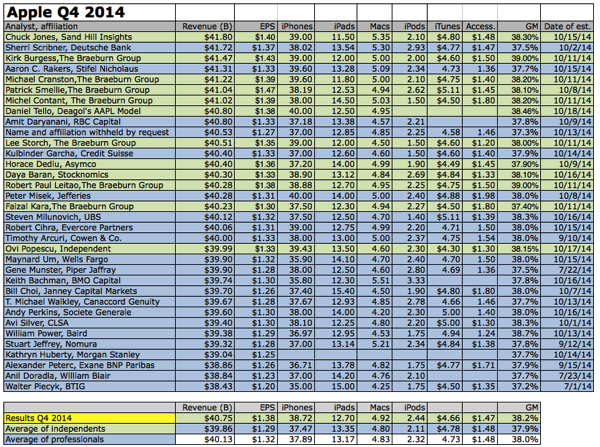 While releasing the first trailer for the Antoine Fuqua-directed historical drama, Apple has today announced that Will Smith’s next film ‘Emancipation' will premiere in theaters on Dec. 2 and will stream on Apple TV+ starting Dec. 9. According to Variety, Apple’s decision to delay the film to 2023 after Smith became embroiled in controversy for slapping...
Usman Qureshi
1 min ago

Even though Sony's first VR headset took 8 months to sell a million units, the company is betting big on its next-generation PlayStation VR2 headset with an increased production plan, according to Bloomberg. Citing people familiar with the matter, the publication notes that Sony is planning to make 2 million units of the PlayStation VR2...
Usman Qureshi
21 mins ago