Apple has won an important patent this Tuesday: the U.S Patent and Trademark Office has granted the iPhone maker US Patent No. 8,787,006 for a “Wrist-worn electronic device and methods therefore” which equates to an electronic device dubbed iTime. In fact, the iTime device seems to tie in with speculation about the iWatch (via AppleInsider). 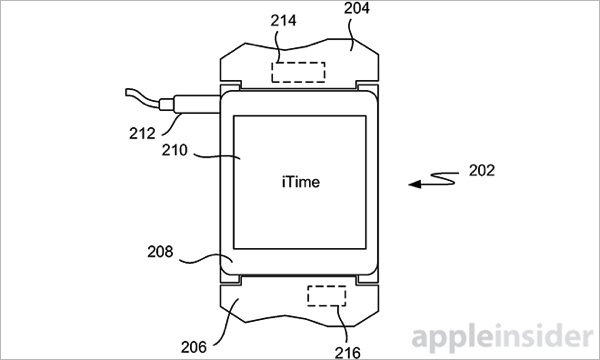 The patent concerns a device worn on the wrist that connects to the iPhone, iPad or computers, and the watch straps integrate sensors and other circuitry to augment its performance – potentially revealing Apple’s smartwatch plans.

Dubbed iTime, the device contains an accelerometer, GPS module, Wi-Fi, and it sports a haptic feedback mechanism. What’s interesting though is the ecosystem the smartwatch can interact with, such as nearby iPhone, laptop or personal computer.

Using a wired or wireless connection the smartwatch can connect to a cellular or Internet-connected device, it is also able to receive notification when synced with a nearby phone, alert the user using haptic feedback, allow incoming calls, text messages, social networks and news network feeds, etc., all of which are displayed on the device’s screen. The patent also outlines features such as alerts when the user has left the smartwatch behind, had it stolen, or is out of range.

What’s interesting is how users control the device: instead of using fingers, users will be able to shake, bounce, tap or otherwise physically interact with the smartwatch.

Apple is widely expected to launch the iWatch sometime this year. Sources speaking with Reuters have claimed the Apple smartwatch will sport a 2.5-inch screen, but another rumour claimed a display sized up to 1.8-inch.