If you’re on the hunt for the latest iTunes Card sale, you can find them at your local Mac’s convenience store as $50 cards are on sale for $40 (20% off). 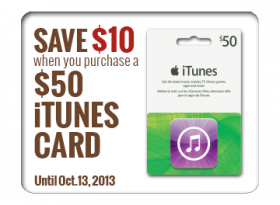 By funding your iTunes account with these 20% off cards, every single digital purchase you make from Apple will be on sale from the App Store, iTunes Store, Mac App Store, iBookstore plus in-app purchases and subscriptions.

As an example, by signing up for Netflix on your Apple TV or iOS device, your $7.99/month subscription works out to $6.66/month (you can even do the same with NHL GameCenter on Apple TV). Looking to get Final Cut Pro X? Use these discounted cards for 20% off and save $60. You can get really creative here.

Let us know if you’re going to jump on this deal. There are over 850 Mac’s stores across Canada and the deal is on until October 13, 2013.

Update: Also at Couche Tard stores in Quebec (thanks Steve!)

The latest video from Mrwhosetheboss reveals some Samsung smartphones are suffering from a swollen battery issue. Samsung dealt with a Galaxy Note 7 fiasco in 2016, when batteries for the smartphone were catching fire worldwide. Now, it appears some older Samsung phones are seeing batteries swell up, even when off and in storage. The tech […]
Gary Ng
55 mins ago