Today Samsung officially announced its financial results for the third-quarter, and while they didn’t release the number of smartphone units sold, that hasn’t stopped Strategy Analytics from declaring them the unit sales leader in smartphones. 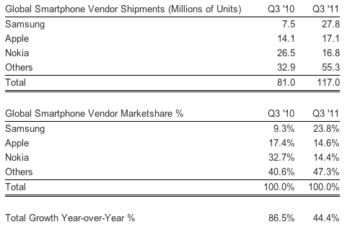 Strategy Analytics has compiled the third-quarter results of all smartphone manufacturers and stated that Samsung [has] becomes the world’s number one smartphone vendor in Q3 2011. The report states that Samsung shipped 27.8 million smartphones and raked in a global market share of 23.8%. While Apple slipped to second place with 17.1 million iPhones sold durning the same period, representing a global market share of 14.6%.

Jim Dalrymple, from at The Loop, has made a keen observation. He notes that the Samsung numbers are “shipped”, while the iPhone numbers are “sold”.

You cannot compare shipped numbers to sold numbers and come up with a conclusion that one company is beating another. You can’t.

Going on to conclude:

Samsung could ship 100 million phones, but that doesn’t tell us how many they actually sold.

With the recent release of the iPhone 4S, Apple is expecting all-time record iPhone sales during the current quarter.