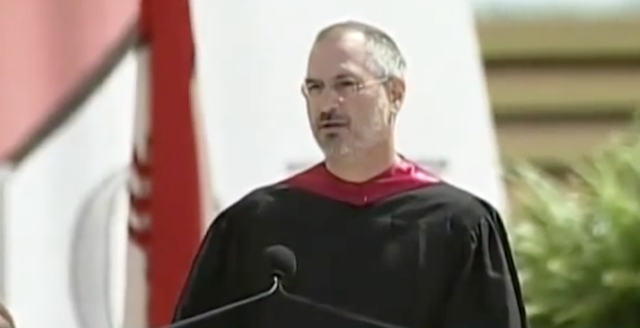 Steve Jobs’ upcoming new biography titled Becoming Steve Jobs (Pre-order at Amazon), an excerpt of which was also published earlier this week by Fast Company, has revealed that Jobs’ legendary Stanford commencement speech almost never happened, thanks to a series of setbacks that morning. The book, written by Brent Schlender and Fast Company executive editor Rick Tetzeli, notes that at first, Steve couldn’t find the keys to his SUV, and when he did, he decided he didn’t want to drive anyway, so Laurene had to drive him instead.

“He’d use the short ride to rehearse once more. By the time the family piled into the SUV, they were late. Laurene drove as Steve tweaked the text again. Steve was sitting shotgun, with Erin, Eve, and Reed piled into the backseat.”

When they reached the campus, Steve and Laurene fumbled through their pockets and Laurene’s handbag, looking for the VIP parking pass they’d been sent. They couldn’t find it anywhere.

Over twenty thousand people were already piling into the stadium, and many of the roads were closed to accommodate the heavy foot traffic. After a series of setbacks, “Steve was getting tense—he thought he might miss the only graduation speech he’d ever agreed to give.”

And when the family came close to the final roadblock separating them from the stadium, they were signaled to stop by a policewoman, who approached their car and told them they couldn’t go through.

“You can’t go this way, ma’am,” she said. “Theres no parking here. You’ll have to go back to Paly [Palo Alto High School], across El Camino. That’s where the overflow lot is.””No, no, no,” Laurene said. “We have a parking pass. We just lost it.”

The policewoman stared at her.

“You don’t understand,” Laurene explained. “I have the commencement speaker here. He’s right here in the car. Really!”

“Really?” she said, raising her eyebrows. “Which one?”

Everyone in the car broke out laughing. “Really,” said Steve, raising his hand. “It’s me.”

To refresh your memory, here’s an HD version of the Steve Jobs’ legendary commencement speech from 2005: