ShareThis has today revealed in a new study of social behavior across various mobile devices, that Apple’s iPhone is the ‘most social device’ in the world. According to the findings of Palo Alto-based publisher platform, users are 3 times more likely to share their content via iPhone as compared to the desktop, and are one-and-a-half times more likely to share on an iPhone versus all other mobile devices. 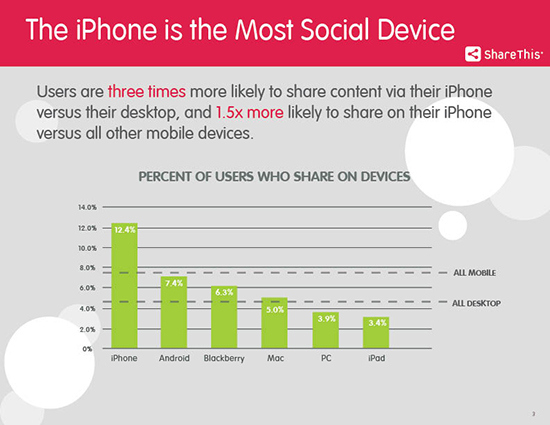 As highlighted by TechCrunch, the study oddly indicates that Pinterest is the most popular on the iPad, where it dominates with almost 50 percent of social activity. This suggests that perhaps ShareThis’s sample is not the most consistent. Furthermore, ShareThis’s network is currently moving towards bringing more consistency between web and mobile platforms, as is apparent in the sample sizes: 4.9 billion social patterns across desktop web and 1.2 billion social patterns across mobile web over the course of 30 days.

“According to the research, consumers are nearly twice as likely to click and share content on social networks through mobile devices than on desktops, and on mobile sharing activity is dominated by Facebook, Twitter and Pinterest. Facebook, in fact, accounts for 60 percent of sharing on mobile, and Pinterest is nearly three times more represented on mobile than desktop. Meanwhile, most of the email-based sharing happens on the desktop”.

Looks like developers will now start placing that Pinterest button at a more prominent position on their sites.