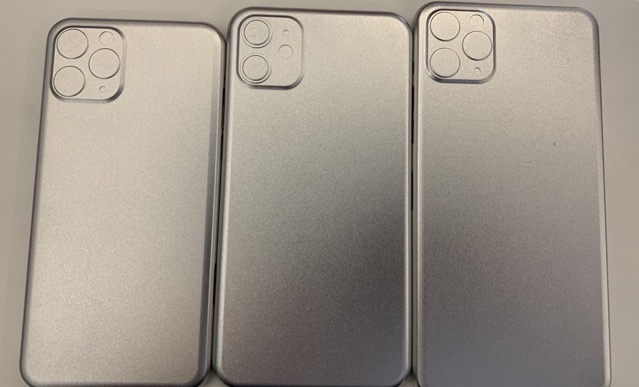 The image claims to show leaked molds of this year’s flagship iPhones. For those who don’t know, smartphone molds are used by case manufacturers to test compatibility with upcoming cases, and in case of the iPhones, they are typically based on leaked schematics and dimensions coming out of the Foxconn factory.

The newly leaked molds depict a dual and triple camera set up in a triangular arrangement set inside a square bump which also contains the flash:

At superficial glances, it seems cruder compared to the sleeker vertical dual-camera module used in iPhone X and iPhone XS. It is even more strange that the 2019 iPhone XR will seemingly also be getting a square notch even though it will only feature two cameras, not three.

Previous reports have also claimed that the display on the iPhone XR 2019 will measure 6.1-inches. Since the display size is the same as last year, we can also expect the 2019 model to have an identical LCD panel with a resolution of 1,792 x 828 pixels.

[caption id="attachment_389886" align="aligncenter" width="1200"] Image: LCG Auctions[/caption] A rare, factory-sealed original iPhone from 2007 in mint condition is up for bidding at New Orleans-based LCG Auctions' 2023 Winter Premier Auction, which will run through February 19 at LCGAuctions.com. According to LCG Auctions, the item could ultimately fetch more than $50,000 USD. The same auction house...
Nehal Malik
30 mins ago