A member of the Asahi Linux team has shown the GNOME desktop running on the Apple M1 chip, reporting that it is “not great, but usable.” 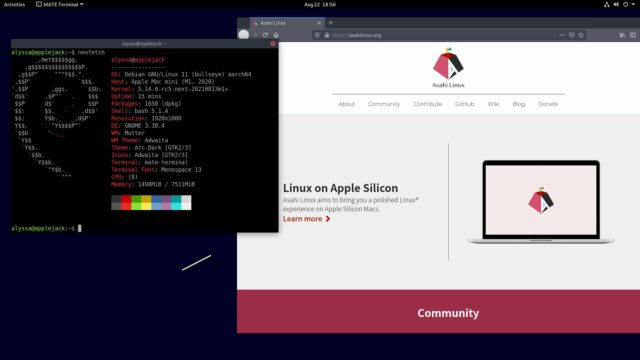 Alyssa Rosenzweig, a prominent Asahi Linux developers working to port Linux to the Apple M1, announced the milestone on Twitter. She was able to get Debian booted on the Apple M1 to reaching the GNOME Shell desktop environment.

No, it’s not GPU accelerated. Yes, I’m sending this tweet from it. pic.twitter.com/P4YuPEnbvp

A terminal in the shot shows that it is running a pre-release of the 5.14 Linux kernel, Debian Linux, and GNOME 3.38.4. “No, it’s not GPU accelerated,” she said, adding: “Honestly, it’s usable. Not great, but usable, on a near mainline kernel. If ‘missing most drivers’ is this snappy, when everything is done @AsahiLinux will run like a dream on these machines.”

The important caveat though is that currently that desktop experience is relying just on LLVMpipe for OpenGL acceleration as needed by the GNOME desktop. LLVMpipe is the Mesa Gallium3D software implementation for accelerating OpenGL on the CPU.

The developer took to Reddit to clarify a number of points:

She further explained that the kernel used included patches for the pin control subsystem, PCIe, and a “work in progress display driver… that gets us to display, USB and Ethernet.”

She described it as a “nice milestone on the way to a DCP driver,” where DCP is a co-processor for the GPU, unique to Apple silicon. Support for GPU acceleration is critical to a fully usable and polished operating system.