Logiix ChatterMitts: Answer Calls with Thumb and Pinky Finger Like This Guy [PIC]

When it’s freezing out, ‘ain’t nobody got time’ to reach into their pockets to answer the phone. That’s why the Bluetooth-powered Logiix ChatterMitts allow you to take phone calls with your thumb and pinky fingers, like how you used to when you were five years old.

This is not a joke, but an ingenious and somewhat crazy idea, which you might have already seen before on the web. These gloves are available at London Drugs for $49.99, as spotted in their latest flyer.

Calls are answered via a button on your wrist, while the thumb holds the speaker and the pinky has the mic. Get ready to look ridiculous (or awesome) when answering calls in public! 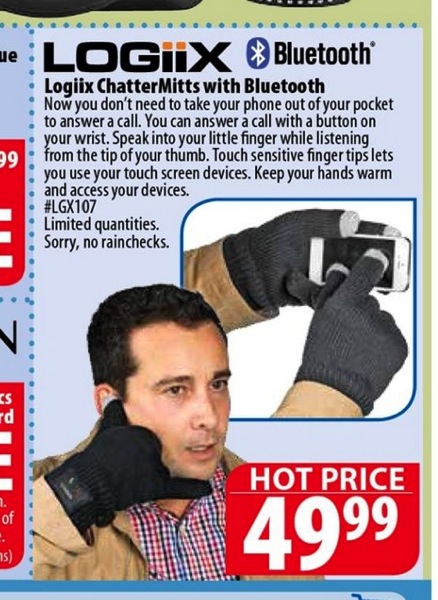 These gloves should work with the iPhone. A similar pair is available from TheSource.ca for $29.99. The question remains: who’s going to buy a pair?