Apple’s new Mac Pro was available to order on Tuesday. Though the price of the entry-level configuration is $7,499 CAD, if you go with all the many upgrades, the powerhouse computer tops out at more than $63,000 — and that doesn’t include software or a display. 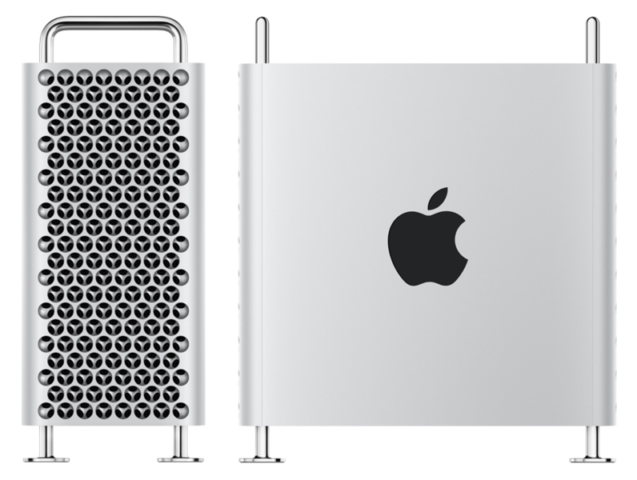 “Spend a few tens of thousands on optional upgrades, and the new Mac Pro becomes a list of superlative performance specs,” reads a new report from Popular Mechanics. “A 28-core CPU. Twelve RAM slots, for up to 1.5 terabytes of DDR4 memory. Up to four GPUs. The 1.4 kW power supply. The Pro Display XDR is the same story. 6K resolution. 1,000,000:1 contrast ratio. 1,000 nits of sustained brightness, up to a peak of 1,600—for comparison on that last number, an iPhone 11 works in direct sunlight with only 625 nits.”

However, that same report notes that these sorts of specs generate a ton of heat. While most high-end PCs dissipate heat with big fans and pump-driven water systems, Macs a partly known for running at a near-silent noise level. Apple engineers had to find new ways to “exploit the laws of thermodynamics,” explains the report.

Chris Ligtenberg, Apple’s senior director of product design, is behind the Mac Pro’s fan system — three axial fans in the front, with a blower in the back.

“Years ago, we started redistributing the blades,” he says. “They’re still dynamically balanced, but they’re actually randomized in terms of their BPF [blade pass frequency]. So you don’t get huge harmonics that tend to be super annoying.”

The engineers explain that noise was a crucial element to the fan’s design, noting that “something loud but pleasantly pitched can be more tolerable than something quiet but irritating.”

“You can have something at a certain SPL [sound pressure level] that sounds really good, but you can have something that’s actually at a lower SPL that grates on your nerves and sounds really awful,” says John Ternus, VP of Hardware Engineering at Apple and head of the Pro and Pro Display’s development. “We want to get really great performance where, you either can’t hear it, or if you can hear it, it’s kind of a pleasant noise. A ton of analysis goes into figuring out how to optimize for that.”

The report also notes that the Mac Pro and Pro Display’s cheese grater-like look is specifically designed to dissipate heat:

Ideally, anyone who uses a Pro won’t even be aware of the fans’ presence. But it’s impossible to ignore the aluminum case, with those grids of precision divots covering the front and back of the Pro’s exterior and the rear of the Pro Display. That pattern is an ornate example of a passive cooling. That’s where you take a hot component, like a motorcycle engine’s combustion chamber, and attach metal protrusions that absorbs heat and then dissipates it. The more surface area the metal can expose to the air circulating around it, the better. Next time you walk by a motorcycle, look for the thin metal fins stacked along the outside of the cylinders.

While the Pro Display has fans for specific components, the bored metal holes on the back are what keeps its huge panel of LEDs cool enough to run so bright.

While the maxed-out Mac Pro is certainly a niche item (and maybe a bit overkill), it’s interesting to see the new ways Apple is adapting technology to suit its needs.