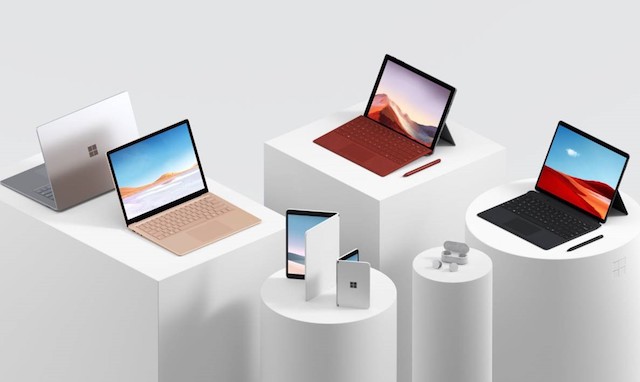 At its October 2019 Event held today in New York City, Microsoft has announced its broadest Surface lineup ever, including the Surface Laptop 3 in both 13.5 and 15-inch configurations, the Surface Pro 7 and Surface Pro X, as well as the all-new foldable Surface Neo tablet, the Surface Duo Android phone, and wireless Surface Earbuds.

Microsoft’s new Surface Laptop 3 will come in 13.5-inch and 15-inch versions, feature both USB Type-C and Type-A ports, include fast-charging over Surface Connect, and a removable hard drive. The laptop will sport AMD Ryzen 7 Surface Edition with Radeon RX 11 Graphics.

Microsoft’s new Surface Pro 7 and Surface for X continue to remain the company’s most versatile 2:1 devices. Redesigned from the inside out, Surface Pro 7 is now twice as fast with a 10th Generation Intel Core processor, both USB-A and USB-C and an all-day battery.

Meanwhile, the powerful new Surface Pro X with a 13-inch edge-to-edge display features a new Microsoft SQ1 processor co-designed with Qualcomm, that pushes 2 teraflops of graphics processing power, and is the fastest Qualcomm processor ever created for a PC.

With Surface Neo and Surface Duo, Microsoft is introducing a new category of dual-screen devices.

Surface Neo is a dual-screen foldable device built on Windows 10X, featuring a 360-degree full-friction hinge that connects two 9” screens. When you open it, you have a full-size 13” display running full productivity apps, with a removable keyboard and compatibility with Surface Pen and Bluetooth mouse.

On the other hand, the new foldable Surface Duo device runs Android apps, makes phone calls, has two paper-thin 5.6-inch screens that unfold to 8.3 inches, and just like Surface Neo, it can be used in a variety of modes.

The two devices will be available later this year.

Microsoft’s new wireless Surface Earbuds offer touch and voice controls for music, calls, and more. Each earbud has two microphones and works on any platform, with up to 24 hours of battery life with the included wireless charging case. Surface Earbuds will be available later this year for US $249.

SaskTel has announced the expansion of its 5G network to a number of rural communities, including the Town of Lumsden. With its hyper-fast data speeds, SaskTel’s 5G network is bringing a new level of wireless connectivity to residents and businesses across Saskatchewan. “Saskatchewan people will continue to benefit from some of the best communications technologies...
Usman Qureshi
28 mins ago