According to a report by Neowin, Microsoft is set to unveil its 8-inch Surface Mini tablet with pen support at a “Microsoft Surface Event” on May 20th. The smaller tablet, which is clearly aimed at competing with iPad mini, has been rumored for well over a year but it looks like the device is now finally ready for launch. Invitations for the event, that will kick-off at 11am EDT / 8AM PDT, have already been sent out with the tagline “Join us for a small gathering.” 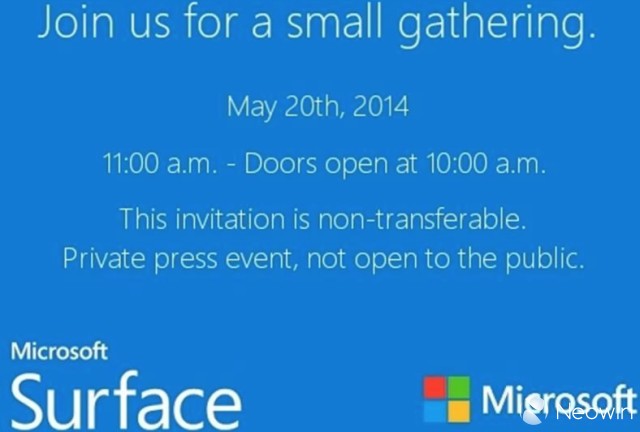 The source claims that the alleged Surface Mini tablet will sport a 7.5-inch, 1440 x 1080 display with a 4:3 aspect ratio, an ARM processor and run Windows RT operating system. While Microsoft has not yet officially acknowledged the existence of such a device, it has recently issued a statement that “We have a lot of great things that we are thinking about and working on, and there are multiple aspect ratios and sizes and awesome things to come from Surface.”

“When the Surface 2 launched, it brought with it a new color option, silver. The mini may expand upon the portfolio of options but we won’t speculate on the inclusion of color options on the smaller sized devices. If you were hoping for a kickstand to be built in, we have some bad news, kinda. The device will have a cover available that will work as a stand but, like the touch and type covers, will be an available accessory to the device.

One item we are still digging to find out is the launch price, that is still not known at this point but we would expect Microsoft to keep it competitive iPad mini which starts at $299 and other tablets”

It is also being speculated that the device will hit the shelves by the end of June, the same month when Apple is holding its annual Worldwide Developers Conference (WWDC).