This week, Microsoft began rolling out an update to Cortana that makes the personal digital assistant’s reminder capabilities a lot more sophisticated.

Cortana has had the ability to manually create time, location, or person-based reminders from Windows 10 or mobile for quite some time. The reminders are then triggered across all your devices.

Today, Microsoft has announced that it is adding a new feature to Cortana that will remind you to keep promises that you made in your emails. The company is using machine learning to highlight phrases in emails where you may have promised something to your boss, friend or family member.

The result of the new feature is a reminder that pops up telling you “don’t forget you mentioned this.” 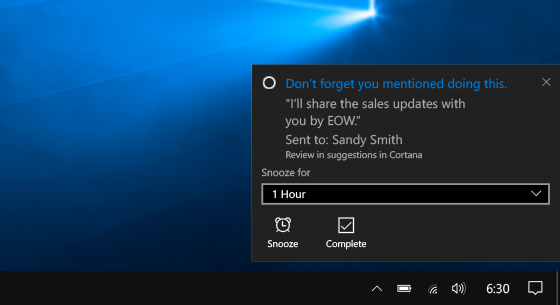 Cortana’s smart reminders will be available first on Windows 10 PCs, with support for iOS and Android in the coming weeks. Currently, Microsoft is supporting Outlook and Office 365 accounts for these reminds, but the company said that supports for other accounts like Gmail will be coming soon.

In order to enable this new feature, you will need to connect an Outlook or Office 365 account to Cortana. Users will start receiving reminds as soon as the service detects your promises and commitments.