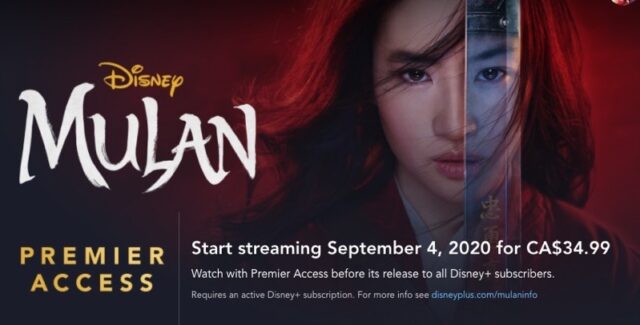 Starting today, Disney Plus subscribers can stream Disney’s live-action remake Mulan. Following the postponement of the blockbuster film, Disney decided that the film will land on its streaming service with a premium access add-on.

Starting today (September 4th) users who are already subscribed to Disney Plus can log in and request premier access to stream the Mulan remake. For $34.99 CAD, users can gain infinite access to the film as long as they retain their Disney Plus subscription.

2020’s Mulan is directed by Niki Caro and written by Rick Jaffa and Amanda Silver. The film stars Yifei Liu in the titular role with supporting cast Donnie Yen as Commander Tung, Li Gong as Xianniang, and Jet Li as the Emperor. While the beloved 1998 animated film incorporated musical numbers and folklore, 2020’s Mulan is centred on being more grounded. It tells the story of a young Chinese woman who disguises herself as a male warrior in order to save her father.

The COVID-19 pandemic has put the film industry through the wringer this year. Many other films such as Scoob! and more recently, Bill and Ted Face the Music have released through VOD. Back in March, as theatres began shutting down, the theatrical run of Onward was disrupted. Disney opted to release the film on Disney Plus with additional costs to subscribers. Additionally, Disney released the film version of Hamilton and Artemus Fowl on the streaming service this year as well.

However, Mulan was budgeted to become a major blockbuster for the company. It was originally slated to release on March 27th before being pulled for the company’s release schedule. The film was then delayed three more times before Disney CEO Bob Chapek announced it would land on Disney Plus with a premium cost.

Mulan will be available to stream from September 4th until November 2nd, 2020 with premier access. Afterwards, Mulan will then transition to become available to all subscribers on December 4th, 2020.