Netflix Shares the Most Binged TV Shows of 2017 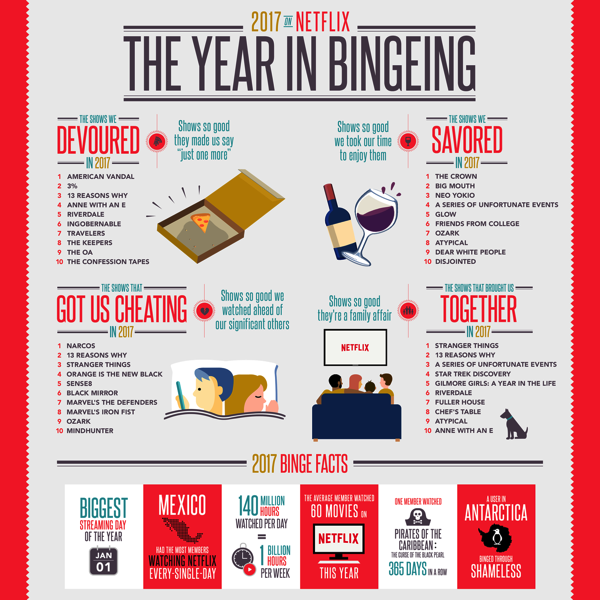 Netflix has just shared its year-in-review, spotlighting the most binged TV shows of 2017 while also revealing that Mexico, Canada, and Peru are the top bingeing streaming nations. Netflix members around the world watched more than 140 million hours per day, which is just over 1 billion hours per week. “Even Antarctica got in on the watching action, where someone binged through Shameless”, notes Netflix.

There’s much to say about what we watched, but how we watched was also intriguing. Though bingeing was standard in 2017, not all series were enjoyed in the same way – there were those we devoured, those we savored, those we cheated on, and those that brought us together…

The one we’re still scratching our heads about, the person who watched Pirates of the Caribbean: The Curse of the Black Pearl 365 days in a row (streamin’ me timbers?). An impressive feat, especially as the average member watched around 60 movies on Netflix this year.

Here are the lists of the most binge-watched TV shows of 2017 as put together by Netflix.

The Shows That Got Us Cheating in 2017

The Shows That Brought Us Together in 2017

Readdle has just rolled out a major productivity update for its cross-platform Spark email client, introducing an all-new Home Screen, Smart Inbox, Priority Email, Gatekeeper email blocking, and more. "We have more “wants” and “needs” than we have the capacity to fulfill," noted the developers while announcing the expansion of Spark beyond Mac, iOS, and Android...
Usman Qureshi
25 mins ago