Netflix announced its Q1 2022 earnings on Tuesday afternoon and said its paid net additions dropped 200,000, compared to its guidance forecast of an additional 2.5 million and 4 million users in the year-ago quarter.

The company said the suspension of services in Russia and paid memberships in the country resulted in a loss of 700,000 paid net additions; aside from the Russian impact, Netflix said paid net additions were 500,000 million users.

Netflix also said the decline was caused by password sharing. “However, our relatively high household penetration – when including the large number of households sharing accounts–combined with competition, is creating revenue growth headwinds,” said the company.

Wall Street estimates pegged Netflix to see a gain of 2.7 million subscribers for the quarter.

“The main challenge for membership growth is continued soft acquisition across all regions. Retention was also slightly lower relative to our guidance forecast, although it remains at a very healthy level (we believe among the best in the industry). Recent price changes are largely tracking in-line with our expectations and remain significantly revenue positive,” said Netflix in a note to investors.

Netflix said in Q2 it is forecasting a loss of 2 million subscribers.

The streaming service saw revenue of $7.87 billion in Q1, an increase of 9.8% year-over-year, with an operating margin at 25.1%. Netflix now has 221.64 million paid streaming memberships worldwide, seeing an increase of 6.7% compared to the year-ago quarter. 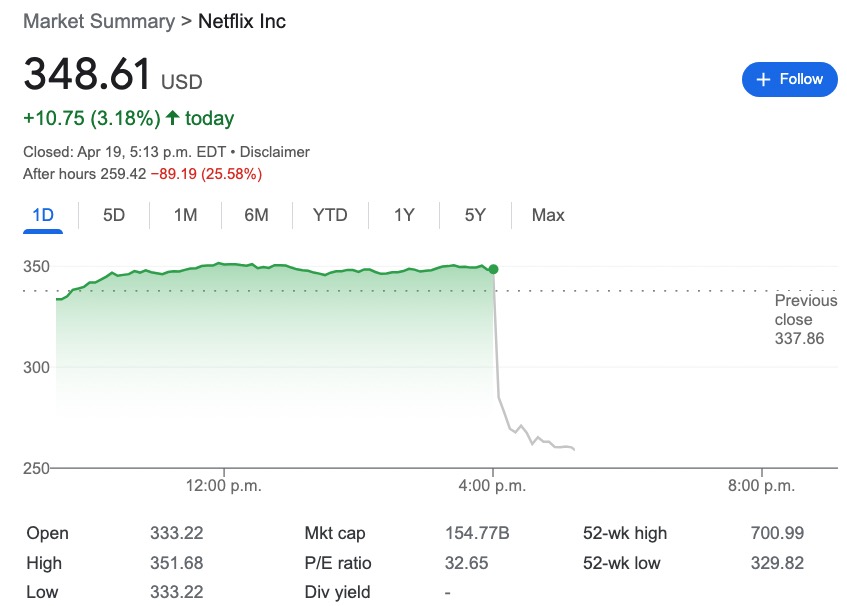