Earlier this week, the CRTC announced its new requirements for cable and satellite TV operators: starting in March 2016, companies will have to cap the prices for their basic television packages at $25 per month, alongside the option for customers to opt for the television of their choice without having to acquire expensive bundles. 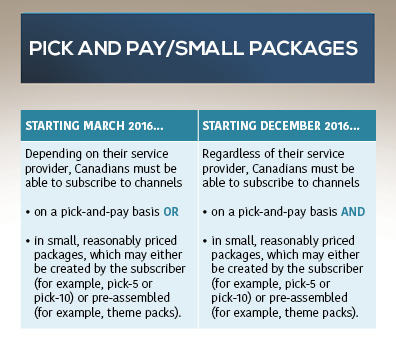 Michael Geist, a law professor at the University of Ottawa (via the Star), sees this move as the regulator’s effort to reduce or eliminate outdated regulations, fostering a more competitive landscape. What makes this decision particularly notable, Geist says, is that the CRTC has identified a new threat to a competitive broadcast environment.

As dissected by Geist, the CRTC’s ruling focuses on imposing limits on vertically integrated companies such as Bell, Rogers, Shaw, and Quebecor. The regulator doesn’t seem to be concerned about players like Netflix: the threat comes from vertically integrated companies “who combine ownership of conventional and specialty broadcasters, cable or satellite broadcast distributors, broadband Internet access providers, and wireless services,” Geist notes.

To address this issue, the CRTC mandated the “pick-and-pay” option (starting March 2016), and for every service that is owned and distributed by the aforementioned companies, they will be required to offer an independent programming service in the same language, if available (starting 2018). Rogers and Bell were in favour of a 2:1 ratio, while Quebecor opposed any rules.

“This is essentially the government or the CRTC encouraging the industry to move towards an online distribution model,” said Greg MacDonald, head of research at Macquarie Capital Markets Canada (via the Globe and Mail). “What happens when that’s the case is that companies lose pricing power and the potential for subscriber risk also increases, because it increases the options customers have.”

Finally, as Geist observes, the Canadian regulator sees Netflix as a pro-competition entrant that creates more choice and pushes other players toward innovation.