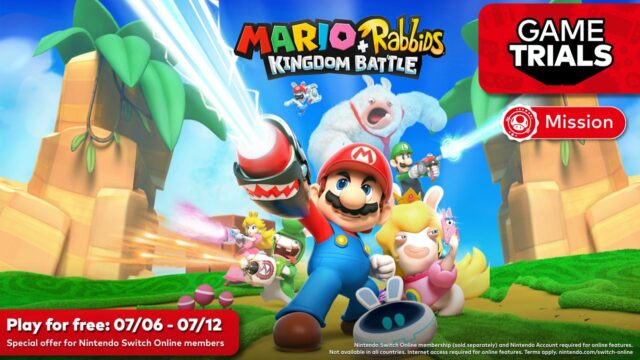 Nintendo has announced that starting today Nintendo Switch Online subscribers have access to the full version of Mario + Rabbids Kingdom Battle. Players have until July 12th to play the game for no additional cost.

On Twitter, Nintendo announced that ahead of the October 20th launch of Mario + Rabbids Sparks of Hope, the first game in the series will be available to play for Nintendo Switch Online members.

Mario + Rabbids Kingdom Battle is a turn-based strategy adventure game developed in partnership between Nintendo and Ubisoft. Ubisoft Milan took the reigns of the game, crafting a game where iconic characters of The Mushroom Kingdom come face to face with the Rabbids. Mario, Luigi, Peach, and others must team up with the chaotic Rabbids and navigate through four different worlds.

The game was first released on August 29th, 2017 and was met with a lot of critical acclaims. The year following, Donkey Kong Adventure was released as a DLC expansion pack for the game. This year will see the release of the long-awaited sequel Mario + Rabbids Sparks of Hope which appears to offer more of the core XCOM-style gameplay.

According to Nintendo, players who decide to purchase the game following the conclusion of this offer will maintain their save data. Therefore, any progress made across the six-day window won’t be lost. In Canada, Mario + Rabbids Kingdom Battle costs $79.99 via the Nintendo eShop.

Twitter on Friday confirmed a December 2021 security breach that stole data from more than 5.4 million user accounts using a zero-day exploit — reports BleepingComputer. The hack exploited a vulnerability in the mechanism that Twitter lets users link email addresses and phone numbers to their accounts. Threat actors were able to submit an email...
Nehal Malik
18 hours ago

Apple announced this week its Maps team will be driving and walking across six Canadian cities next week. The Apple Maps team will be in Toronto, Montreal, Calgary, Vancouver, Edmonton and Ottawa from Monday, August 8, 2022. Apple says they will be “driving vehicles and wearing specialized backpacks with equipment to help us build the...
Gary Ng
19 hours ago