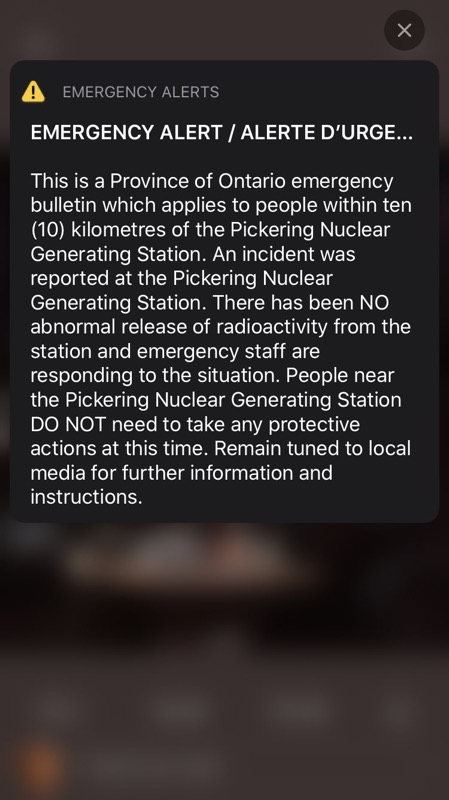 Residents in Ontario woke up to an emergency wireless text alert this morning, regarding an “incident” at the Pickering Nuclear Generating Station. However, the alert turned out to be false, as it was “sent in error”, according to the Premier’s office.

As expected, it caused some confusion and panic on social media.

But it quickly turned out to be false and was sent in error.

BREAKING: This emergency alert about the Pickering Nuclear Generating station was “sent in error,” officials in the premier’s office confirm. A statement will be coming shortly from Ontario Power Generation. pic.twitter.com/sD7Yyffxc3

“There is no safety incident and there is no danger to the public. The emergency alert was triggered in error,” according to premier’s office, reported Mike Crawley from CBC News.

Ontario Power Gen tweeted out 45 minutes after the erroneous alert, saying “Important update: the alert regarding #Pickering Nuclear was sent in error. There is no danger to the public or environment.”

According to Crawley, “Multiple sources telling me the province was responsible for triggering the #Pickering emergency alert in error this morning, *not* the nuclear plant itself or @opg Ontario Power Generation. #onpoli”.

Pickering Mayor, Dave Ryan, said “Like many of you, I was very troubled to have received that emergency alert this morning. While I am relieved that there was no actual emergency, I am upset that an error such as this occurred. I have spoken to the Province, and am demanding that a full investigation take place.”

Did you get this wireless text alert on Sunday morning in Ontario?