“Caste: The Origins of Our Discontents” is Oprah Winfrey’s Most Important Book Club Selection

In partnership with Apple, Oprah Winfrey has unveiled the newest selection for Oprah’s Book Club, “Caste: The Origins of Our Discontents,” by Isabel Wilkerson, which is now available on Apple Books in both ebook and audiobook formats. 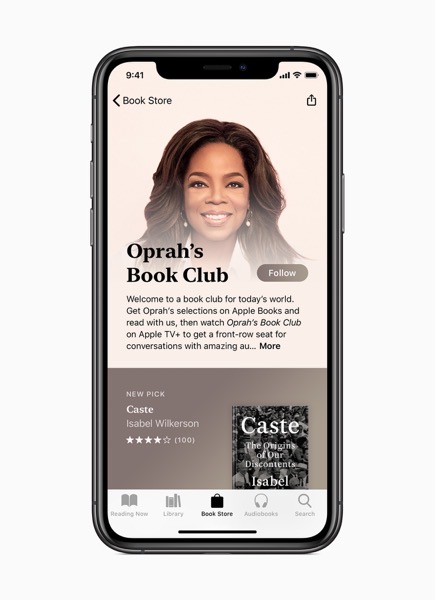 Customers can now read and listen to an exclusive excerpt of “Caste” on Apple News and further explore the themes highlighted in “Caste” in curated collections on Apple Books and Apple Podcasts.

“This might be the most important book I’ve ever chosen for my book club,” said Winfrey. “‘Caste: The Origins of Our Discontents’ provides a new way of seeing racial inequality, giving rise to countless aha moments and helping us truly understand America as it is now and how we hope it will be.”

Next week, customers will also be able to listen to Apple Music’s Beats 1 host Ebro Darden interview Wilkerson about how her book is reflective of the times.

Later this month, customers can also read a collection of related articles on Apple News, curated by Winfrey as the app’s first-ever guest editor, and next month, they can enjoy a “Caste” discussion guide on Apple Books to help host their own conversations around the book and the important issues it explores.

Readers around the world can discover Oprah’s Book Club through the Apple Books app on iPhone and iPad and learn more about the latest selection at this link.

Apple's long-awaited AR/VR headset may not start shipping until the second half of 2023 due to a delay caused by some "software-related issues," according to TF International Securities analyst Ming-Chi Kuo. Kuo previously had the headset pegged for a second-quarter release. He said in a tweet that his sources indicate components for the mixed-reality headset...
Nehal Malik
8 mins ago