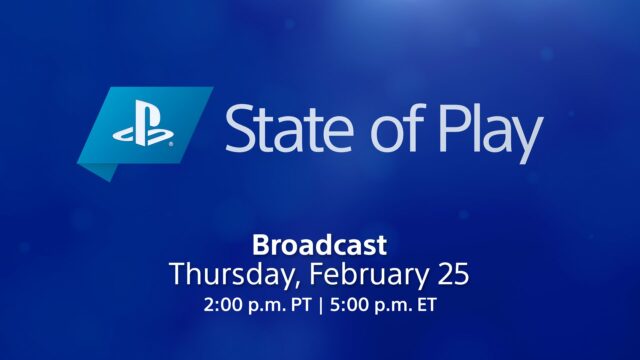 Sony will be airing its first PlayStation ‘State of Play’ livestream of the year tomorrow February 25th at 2 pm PT / 5 pm ET.

In a blog post, Sony announced that its first State of Play stream will focus on upcoming PlayStation 4 and PlayStation 5 announcements and updates. The 30-minute long broadcast is said to “serve up new updates and deep dives for 10 games coming to PS4 and PS5.”

In terms of what to expect, Sony revealed that we can expect to see “new game announcements” and “updates” on a few of the third-party titles and indie games revealed during the PlayStation 5 showcase last June.

Given the timing of the first State of Play, it’s likely that Sony will focus on titles slated to land on PS4 and PS5 early on in the year. PlayStation’s first half of the year includes games like MLB The Show 21, which releases on April 20th, Returnal, releasing on April 30th and Deathloop on May 21st. There’s also a possibility we get another glimpse at Kena: Bridge of Spirits, which was given an early 2021 release window but developer Ember Lab has not provided an updated launch date.

Of course, there are other tentpole tiles awaiting launch on PlayStation consoles. Ratchet & Clank: Rift Apart was recently given a June 11th launch date so there is a chance we see new gameplay for Insomniac Games’ title. Additionally, June’s PlayStation 5 showcase gave us announcements of Horizon: Forbidden West and the God of War sequel. However, it may be unlikely we’ll be seeing a deep dive of either game as the respective releases are further out.

The stream will be made available to watch on PlayStation’s Twitch and YouTube channels.