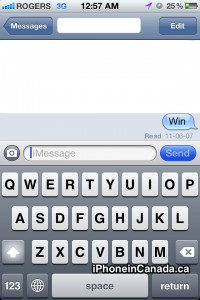 In a blog post published in the early morning, iOS security researcher which we have all known as pod2g noted he had come across a ‘severe’ SMS spoofing exploit on the iPhone:

I mentioned it on twitter a few days ago, I found a flaw in iOS that I consider to be severe, while it does not involve code execution. I am pretty confident that other security researchers already know about this hole, and I fear some pirates as well.

The flaw exists since the beginning of the implementation of SMS in the iPhone, and is still there in iOS 6 beta 4. Apple: please fix before the final release.

In plain English, the exploit allows someone to send you a text message but change the reply-to address of the text. So you could receive a text message from someone you trust, but it could be illegitimate. Here’s how it’s different on the iPhone:

On iPhone, when you see the message, it seems to come from the reply-to number, and you [lose] track of the origin.

Pod2g notes the following reasons why we should be worried about this exploit and to never trust the SMS messages we receive on our iPhones:

Of course, if you question random text messages claiming to come from ‘your bank’ asking for your credit card number and expiry, you should be okay. But its the people who would believe these texts that need to be worried. I’m surprised this exploit has been available for so long, but kudos to pod2g for making it public and encouraging Apple to fix this.

Note to self: never believe any text messages I receive from this day on, ever again.

Update: Pod2g has posted an update and noted you can now verify his earlier claims via his release of sendrawpdu:

The little tool sendrawpdu, based on iphone-elite’s sendmodem is now on github.
With an iPhone 4, and this sample code, you can verify my statements for free 😉 .

Google appears to be working on a new web browser for iOS based on the tech giant's own Blink engine instead of Apple's WebKit, in violation of the App Store Review Guidelines — reports The Register. The in-development browser was referenced in a recent Chromium bug report, but Google says it won't actually release it....
Nehal Malik
31 mins ago