In a recent interview with the Financial Times, Qualcomm CEO Steve Mollenkopf has predicted that the arrival of 5G will take Chinese technology companies to the top of the global smartphone industry, essentially disrupting the current market leaders like Apple and Samsung. 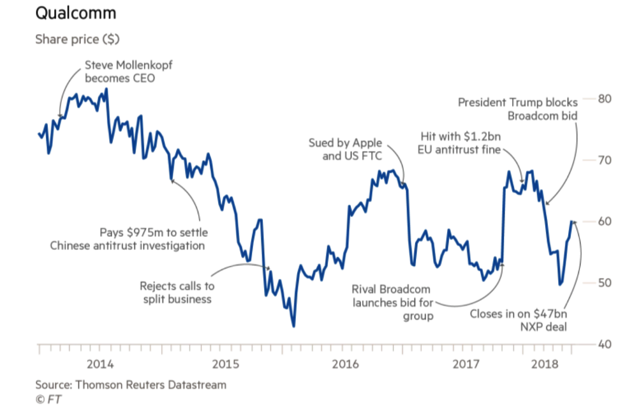 The US chipmaker’s reliance on China has only increased in the wake of a costly legal battle with Apple. Mollenkopf said that China’s telecoms groups lagged behind the rest of the world in deploying 4G by several years but will start to roll out 5G as soon as 2019.

However, Qualcomm still counts Apple and Samsung among its largest customers. “Our job is deliver [5G] at scale and let the market decide,” Mollenkopf added, while being optimistic that the multibillion-dollar fight with the iPhone maker will be over by the end of the year.

“5G has an open door for a lot of these type of changes to occur [again],” Mr Mollenkopf said. “On top of that, it is the first time in the history of the industry where you have significant and sophisticated handset manufacturers from China who have the ability to service the entire world. You did not have that at the beginning of the 4G transition. And they are ambitious.”

Mollenkopf also admitted that there is a “disconnect” between Qualcomm’s share price and “what we think is the intrinsic value” of the company.