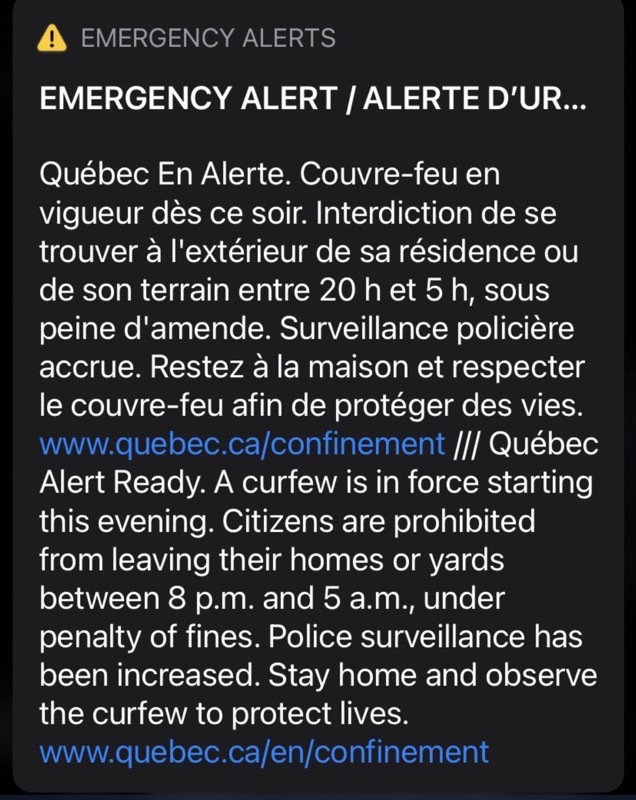 Quebec has launched a new four-week curfew on Saturday evening, to control the COVID-19 outbreak in the province.

The province issued an emergency wireless alert this evening, to remind residents of the new curfew, which will require people to stay home from 8pm to 5am. Those violating the overnight curfew will face fines from $1,000 to $6,000.

“Citizens are prohibited from leaving their homes or yards between 8 p.m. and 5 a.m., under penalty of fines,” read the wireless emergency alert, sent to all compatible smartphones connected to an LTE network. “Police surveillance has been increased. Stay home and observe the curfew to protect lives.”

The Quebec curfew alert has been broadcast! pic.twitter.com/MM9HEXGWq0

The nightly curfew came into effect across Quebec this evening. Unfortunately, the emergency alert Quebecers received was chock full of mistakes on both sides of the linguistic spectrum. Next time, #hireaneditor, one in each language. #COVID19 #polqc pic.twitter.com/cX1Ik7O9Ti

“We all need to stay home as much as possible for four weeks,” said Premier Francois Legault on Wednesday, according to CTV News. “Police officers will make sure everyone respects the rules,” added the Premier.

Grocery stores will close at 7:30pm to allow people to head home, but pharmacies and gas stations are exempt from the curfew. You are allowed to go walk your dog during curfew, however.