Last year RBC offered free iPad minis to new customers who opened select bank accounts, and now we have a similar promo offering up Apple products, in the form of a free Apple Watch Series 1 or 16GB unlocked iPhone SE for $79. 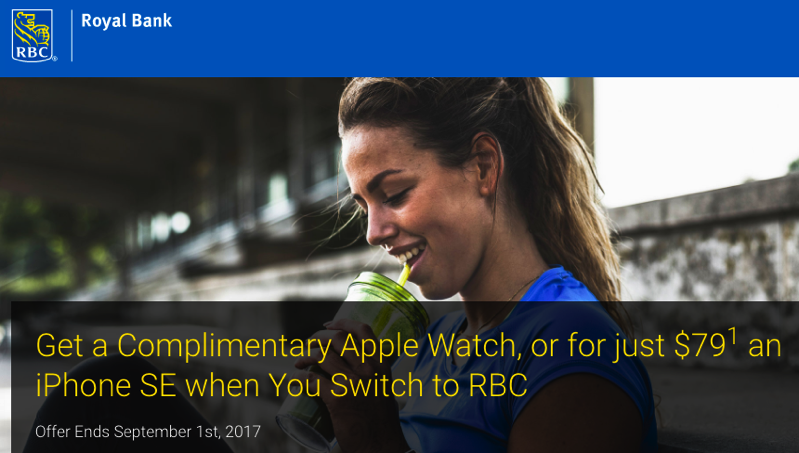 New customers who open an RBC Signature No Limit ($14.95 monthly fee) or RBC VIP Banking Account ($30 monthly fee) by September 1, 2017, will be eligible for the Apple Watch or discounted iPhone SE.

What’s the catch? Customers will be required to setup a payroll as a direct deposit, or two pre-authorized payments by October 1, 2017 to qualify. Once that’s complete, RBC will email you instructions on how to order your Apple Watch Series 1 or 16GB iPhone SE for $79.

You will need to stay with RBC for at least a year (Sept. 29, 2018), otherwise the fine print says RBC has the right to charge your account (or send you a bill) for the following amounts:

Many RFD members suggest TD Canada’s All-Inclusive bank account as a better chequing account, since the $29.95 monthly fee is waived if a $5,000 balance is maintained, plus it comes with free cheques, a small safety deposit box, waived annual fee on Visa cards and more.

According to the European Union's final deadline, all new phones sold in the region, including future iPhones, will have to use USB-C for wired charging by December 28, 2024, The Verge is reporting. The EU’s new USB-C legislation, which has just been published in the bloc’s Official Journal, the rules will officially enter into force in...
Usman Qureshi
19 mins ago

To optimize Chrome for your device’s battery and system memory, Google is introducing two new performance settings so Chrome uses up to 30% less memory and extends your battery when running low. To offer its users an improved browsing experience, Google is rolling out new Memory Saver and Energy Saver modes over the next several...
Usman Qureshi
39 mins ago