RIM today kicked off their BlackBerry World developer’s conference in Florida, and here they unveiled their “BlackBerry 10 Dev Alpha developer testing device” for developers to test out the new BB10 interface.

Here’s what was unveiled in BlackBerry 10, seen as RIM’s chance to get back into the smartphone game. The Verge went hands on with the demo unit, and gave us the rundown on specs:

– the device looks like a mini version of the PlayBook
– 4.2 inch display; screen resolution of 1280 x 768
– built in NFC, micro USB port, micro HDMI port, microSIM tray, quad-band HSPA radio
– the OS on the dev units were “almost entirely the PlayBook OS, *not* BlackBerry 10”
– stripped down version of the OS just for devs: PlayBook settings and setup, the browser, and access to the camera. NO photo gallery app so you can’t see pictures taken unless you’re a dev
– “BB10 is being architected so that it can work as a touchscreen-only device.”
– touchscreen keyboard that learns as you type; ability to ‘flick’ words up into cursor field

RIM is also touting BlackBerry 10 Cascades, which resembles what we’ve seen in numerous iOS app menus such as the Twitter iPad app, and Sparrow on the iPhone. 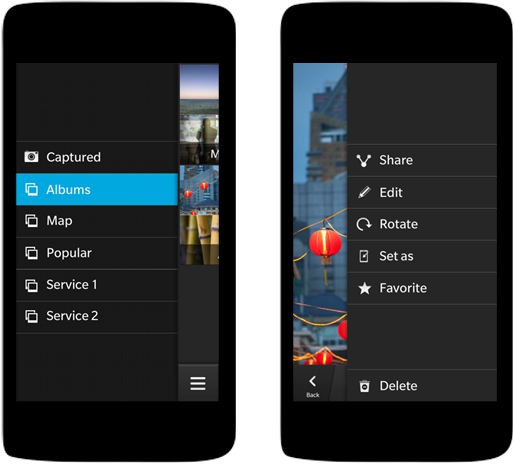 TechCrunch reports on an interview they did with Vivek Bhardwaj, Head of Software Portfolio EMEA for RIM. It’s an interesting read because the answers Bhardwaj provides to TechCrunch are just confusing:

We’ve identified in this world that there is an audience that not only appreciates what we build today but has this desire to really connect to the certain things in their life that they place value on, the things they value in their smartphones, and the things they value on their tablets. We’ve found that it’s different to what an iOS or Android user would put value on.

We’re going to set the stage for how important relationships are to BlackBerry users, as well as how important communities, networking, and messaging are to them. We have this legacy of email and we’ll continue to expand, but we haven’t taken the time to explain to people why messaging is important to our audience.

We want to make sure people understand who we are as a company. It’s important to know that BlackBerry isn’t for everyone. I don’t mean that in an egotistical or selfish manner, but there’s an audience that appreciates and desires what we deliver as an experience.

We need to make sure we’re messaging to them first and foremost.

A focus on messaging? Is that what will turn this ship around?

It will be interesting to see the actual BB10 devices released in the Fall, and if they will be enough to turn the company around, instead of their focus on random flash mob marketing in front of Apple Stores.

What’s your take on BB10? Enough for you to make the switch from your iPhone?