Rogers has announced that Canadian Business and PROFIT magazines have now been merged and that the combined publication will put out a reduced number of issues annually (via Edmonton Journal). According to the source, the merger comes a month after a round of 94 layoffs at Rogers Media, about a quarter of which came from the magazine division. 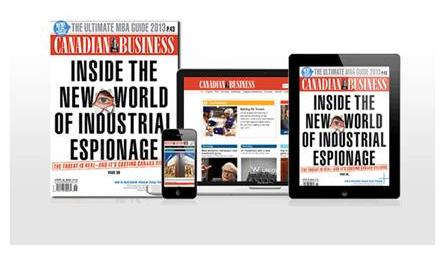 Both magazines are owned by the Toronto-based telecom giant’s publishing division and from now on, they will be operated under the Canadian Business brand and will be published monthly, starting January 16. The company will also put out two PROFIT-themed “bonus” issues. Previously, Canadian Business published two issues per month, while the PROFIT came out six times a year. Rogers says the combined magazine will have a projected readership of more than one million.

“We felt that we had two very strong brands that were serving complementary audiences,” Ian Portsmouth, publisher of the new Canadian Business and former publisher and editor of PROFIT, said in an interview. “Our feeling was that if you’re not changing in this marketplace you’re falling behind.”

He noted that the two magazines will continue to exist online as brands of their own.

Canadian Business subscribers who paid for a 19-month subscription will continue to receive the magazine until that number of issues is up.