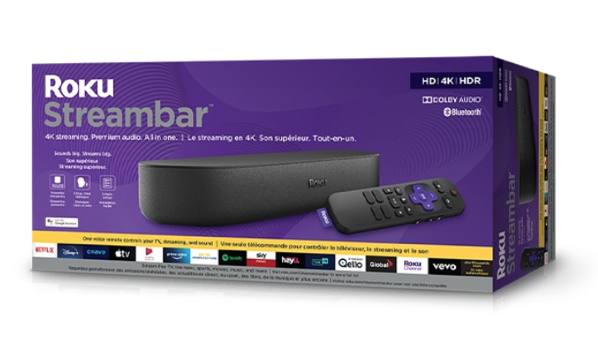 The new Roku Streambar has been announced today in Canada, offering a 2-in-1 entertainment upgrade, according to the company.

Streambar is a Roku 4K HDR streaming device, and soundbar with two side and two front-facing speakers supporting Dolby Audio and a voice remote, available for $189.99 CAD.

The Roku Streambar includes sound settings to boost volume of voices, lower volume of commercials and also a night listening mode for watching in the late evenings. The device can be expanded by adding a Roku Wireless Subwoofer and also Roku Wireless Speakers.

“Over the years TVs have gotten thinner, reducing space for built-in speakers, resulting in less impressive sound, while new streaming services have changed the way we watch TV. With the Roku Streambar, we offer an easy and all-in-one solution to that challenge,” said Mark Ely, Vice President Product Strategy at Roku, in a statement.

“Our engineering teams in Denmark, the United Kingdom and the United States have been working together to design and build the Roku Streambar from the ground up to deliver an incredible streaming experience and the ultimate upgrade for any TV,” added Ely.

On the back of the Streambar there’s an Optical input, HDMI 2.0a (ARC) port and USB 2.0. Roku Streambar also can be controlled with Google Assistant and Amazon Alexa devices, while also supports Bluetooth 5.0.

The Roku Streambar will be available at the end of October for $189.99 CAD in Canada. It also will launch in the U.S., Mexico and the U.K.

The Roku Streambar will join the existing Roku Express, Roku Premiere and the Roku Streaming Stick+ in Canada (no word on the upgraded Roku Ultra with Dolby Vision/Atmos coming here yet).

Also announced today Roku OS 9.4 is coming and will bring a new live TV shortcut to your home screen, which will direct you to the Roku Channel. The update will also bring new themes, improved volume controls for Roku speaker surround sound setups and also improvements to device setup to make it faster.

Also set to debut are standalone Roku Channel apps on iOS and Android, supported by ads.

Roku 9.4 is set to roll out to its streaming devices in September and to Roku TVs over the coming months.