While seeking better terms around anti-competitive demands from Google, Roku has today informed its users via an email that the YouTube TV app may soon be pulled from its platform entirely, Axios is reporting. 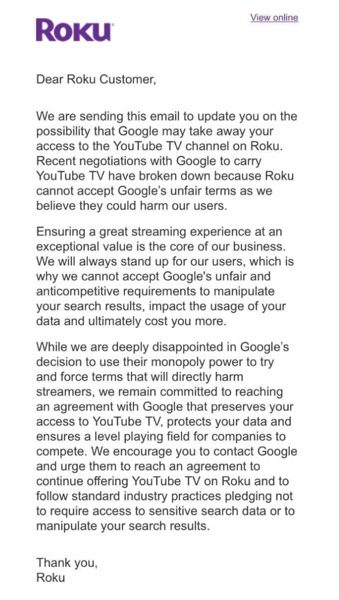 Roku says Google is threatening the removal of YouTube TV to force the company to grant preferential access to its consumer data moving forward, such as favouring Google products in Roku search results.

Both companies are currently competing on a number of fronts, such as smart TV hardware devices, smart TV operating systems, and smart TV content.

According to the report, Google has also asked Roku to block search results from other streaming content providers while users are using the YouTube app on Roku’s system.

Roku alleges Google has asked it to favor YouTube music results from voice commands made on the Roku remote while the YouTube app is open, even if the user’s music preference is set to default to another music app, like Pandora.

In response to the allegations, a YouTube TV spokesperson says, “We have been working with Roku in good faith to reach an agreement that benefits our viewers and their customers.”

“Unfortunately, Roku often engages in these types of tactics in their negotiations. We’re disappointed that they chose to make baseless claims while we continue our ongoing negotiations.”

Google maintains that it has made no requests to Roku for accessing user data or interfere with search results.

United States Senator Michael Bennet wrote a letter to executives of both Apple and Google, calling for the tech giants to remove TikTok from their respective app stores. Bennet believes that the Chinese-owned video creation platform poses security threats, furthering the same narrative that's been brewing for a number of years. Apple's Tim Cook and Google's...
Steve Vegvari
33 mins ago