Rumoured Technical Details of the ‘iPhone 5’ Analyzed by AnandTech 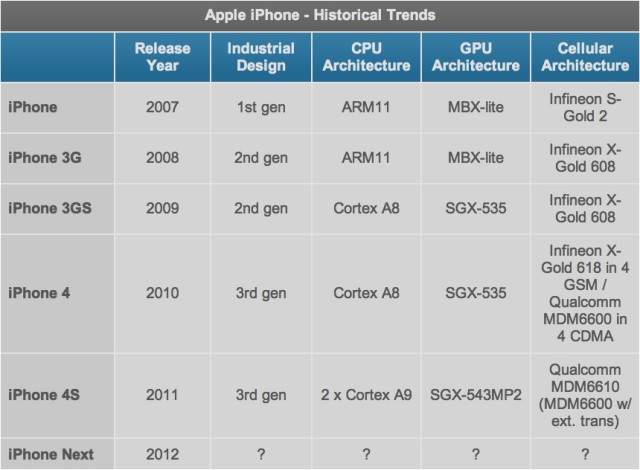 Apple is widely expected to announce the next iPhone on September 12th, as noted by numerous publications. We’ve seen numerous leaked parts to give us a glimpse of what might come in terms of design, but for the technical aspects you won’t read a better breakdown other then the one just published by AnandTech. Brian Klug and Anand Lal Shimpi break down what they expect in the next iPhone. Here’s a snippet:

Based on everything we’ve seen, and the analysis on the previous pages, it seems likely that the next iPhone will feature a dual-core Cortex A9 SoC built on Samsung’s 32nm LP (HK+MG) process, with a PowerVR SGX 543MP2 driving a larger 4-inch display. Battery capacity will see a slight bump, but battery life itself should be measurably better compared to the iPhone 4S thanks to a move to 28/32nm silicon for the baseband and apps processor. LTE and TD-SCDMA support will likely be driven by a Qualcomm MDM9x15. Evolutionary improvements in the WiFi stack are a reasonable expectation, however NFC support isn’t.

How did they come to this conclusion? Click here to read the full article. There is detailed analysis of the chassis and display, system on chip (SoC), cellular connectivity, NFC, WiFi and battery. This is probably the best estimated guess of what we can expect in the next iPhone we’ve seen, based on the evidence ‘leaked’ to date.