Following several reports of breaks, bulges, blinking screens, and other defects after using the Galaxy Fold for just a day, Samsung has started retrieving all the Galaxy Fold samples distributed to reviewers, Reuters reports citing a source with direct knowledge of the matter. 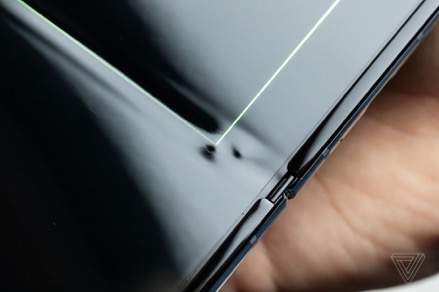 As part of its efforts to minimize the embarrassment and reputational blow amid the launch of its first foldable smartphone scheduled for release on April 26th, Samsung has now postponed the Galaxy Fold’s launch for an unspecified period of time while it investigates the damage reports.

According to Samsung, initial findings into the causes point to impact on exposed areas of the screen’s hinges. The company has not yet shared any further details:


The setback for the $1,980 niche device is trivial compared to the Galaxy Note 7 debacle of 2016, when exploding batteries forced Samsung to scrap the flagship model at huge cost. Galaxy Fold shipments this year are likely to make up less than half a percent of Samsung’s annual total, analysts and investors said.

“It’s disastrous that Samsung sent samples to reviewers without clear instructions on how to handle the device,” said analyst Kim Young-woo at SK Securities.