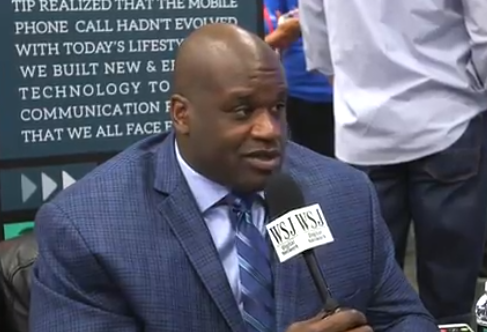 Retired NBA superstar Shaquille O’Neal (I know him as Shaq-Fu) recently did an interview with the Wall Street Journal’s Evelyn Rusli and admitted he’s a self-professed ‘geek’ that loves everything about technology.

Shaq noted he spends roughly $1,000 per week on apps (he emphasizes ‘real money’), and gave the example how lately he acquired 20 deer-hunting apps.

Later in the interview Shaq says he’s always waiting and looking for the next best thing when it comes to tech, such as the long-rumoured Apple iWatch:

He also repeated his story of how he called Steve Jobs’ personal line to try to buy the original 2007 iPhone before launch day, but the late CEO wouldn’t budge on giving him early access. Nice try, Shaq. I don’t know if Tim Cook would give you an ‘iWatch’ early either.